Tear Down this Wall 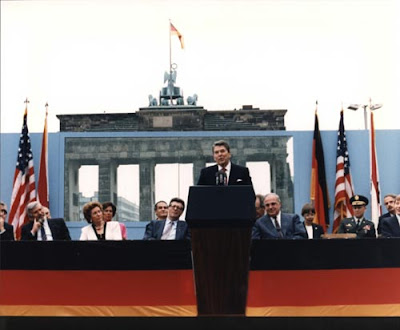 It's a great day for celebrating. I haven't said so before, but every year this anniversary comes around I do celebrate it. The fall of the Berlin Wall and the Soviet Strangle hold was literally something I'd prayed for since childhood, and worked for in my early adult years.

My mother's parents were born in what became the Eastern Block, her father in what was the southern Border region of Poland, in Tarnow-Krasnow, and my Grandmother, in the Tatra mountains, north of Presov in the little village of Visna-Polanka, in what is now Slovakia. They were ethnic Ukranians, with a bit of Polish thrown in the mix. My grandfather emigrated to the US shortly before WWI, and my grandmother after the war, in 1919.

From quite a young age, around 5 or so, I knew that they had relatives who were oppressed and did not have the freedom to go to Mass that I did without repercussion. My grandmother had a niece and other relatives there with whon she could occasionally correspond. But nothing other than very basic family information -- always aware that censors could read the correspondence.
Young as I was at the time -- I remember the shock of the Berlin Wall being thrown up overnight, and people who tried to flee being shot. For years the East Germans would gun down anyone attempting to get to freedom. [I well remember elaborate attempts to excape, in 1979 or so an East German family constructed a balloon and made it to the west, for instance.] In my era of the 50s and 60s the nuns made clear to us that there were other youngsters who did not have freedom of worship -- there were people in our own day dying and suffering for the faith.
When I was older, my youngest uncle married a woman who's only a bit older than me whose family had relatives on both sides of Germany. Only the eldest aunts, AS LONG AS THERE WERE OTHERS HELD HOSTAGE by the East German state, could occassionally visit her relatives in the west for a few short days. The whole family? No.

As a 13 year old, I was impressed with John Barron's book about the KGB - and I read more details of how they terrorized the populace. As I got older, I was introduced to "WITNESS" by Whittaker Chambers -- I read that when I was 19 and garnered more intellectual underpinnings for how people embrace communism, and the tentacles it has over people -- and how he freed his soul from it. [I came about reading him, because I also read William F. Buckley.] Witness, to my mind, is still one of my 10 favorite books of all time. I was a history Major in college in the mid-late 70s -- I concentrated on European history -- primarily Great Britian and Russia (and the Soviet bloc.) I'd read Hedrick Smith amongst other westerners who'd been stationed in east Bloc countries -- ditto Solzhenitsin.

When I was older still (after also acquiring a degree in Computer science) I'd landed a job at General Dynamics. It was 1984 -- not long after what I call "The beginning of the end." What had happened was the election of John Paul II in '78 - a Pole -- the first "sign from God" that God has other plans. The Solidarnost movement took place in the early 80s, freedom lovers in Poland had been embolded by the pope. Margaret Thatcher also became Prime Minister -- another cold warrior who did not accept communism as the natural order of things. Then up Rode Reagan on the White Horse. No, we WOULD not "appease" the Soviets. The hand of God also decided "Time was up" for such Soviet Fossiles as Suslov, Brezhnev, Chernyenko, Adropov -- and there was a new man in -- a committed Communist, Gorbachov (one still, to remind you, who tried to suppress the Baltic States after the Wall fell, and almost had a coup visited on him not long after -- so let's not go all revisionist here) but at least Gorbachov was not one for executing people with different ideas. He was willing to admit that the way things were were not perfect -- but he STILL wanted to reform communism, not destroy it. Reagan (who couldn't meet with the Soviet leaders at first because they kept dying on him) was not one for "rapprochment" -- no, I well remember when the Strategic Defense Inititative was proposed -- liberals screamed and cried we'd all be nuked in a new WWIII. Reagan stood firm.

The Tomahawk Missle program had started to take off in a big way. That was the project I was hired for at General Dynamics. I worked in San Diego on a project which transfered the schematics from PC to Mainframe -- and then onto the factory floor where the Tomahawks were built. The Gretna Green thumb suckers were cyring in their beer. Reagan and Thatcher were firm.

Reagan went to Berlin and said "Mr. Gorbachov, tear down this wall." The phrase stuck -- all over Eastern Euroope, since solidarity, people were speaking out -- coming out of the shadows, disobeying their governments. I can remember the 9 months or so lead up to the Wall coming down -- East Germans had started to cross in romote areas over to Austria, and WERE NOT SHOT AT.

Finally, it came to pass -- on November 9, 1989, I was in Talahassee, on Business -- and when I heard the news, I cried tears of joy. I consider that day one of the best of my life.

Posted by gemoftheocean at 7:55 PM

I was watching on TV, while I, my mother, my aunt and my grandmother were phoning each other up (no email or text messaging) to discuss what was happening.

My grandmother was originally from Konigsberg (it was Prussia, but was taken over) and had lost relatives to the Russians...

What a fantastic post! You remember a lot more details than I do, but I rejoiced when the wall was broken. The idea of people getting shot for trying to escape from East Germany was one of my biggest childhood "fears". I, too, prayed for the families that were split from each other. Sadly, most of the young people of this country have no idea what it was even about.

Yes, good Catch, Mac -- I posted jsut as I broke back from lunch and hadn't had time to proof -- I'll correct in a second.

I was thinking of you, too, when I wrote this, because I knew your mom was from Germany and wondered if you were similarly affected.

I might add a few more detials to this post -- like a picture of Reagan. BTW, I always thought Ronaldus Magnus and the Pope shared a special bond of those who'd been shot at and survived. Tell me the hand of God wasn't in on those two -- both nearly died.

Packrat: so true -- they have NO IDEA the presence the Cold War was.

I think they look at all that like it was "no big deal" the "natural course of things." No, it was the west standing firm -- I'm also going to put a plug in for Boris Yeltsin. It was a few years after, but him standing on the tank the day the Russian officers refused to fire on their own people was one of the greatest days in history, ever.

Sadly, That May had also been the season where the Chinese lovers of freedom had been overrun and gunned down in cold blood because the Government could not tolerate the protests and the impromtu construction of a replica of the Statue of Liberty.

Also 1989 is exactly 200 years since the French revolution started. Remember its the one that underpins marxist idiologies. Yes Heaven has a way of dealing with atheist governments, they swept away in the fullness of time. I suspect they will all be gone by the 300th aniversary,- just a thought.
John

John, thank you for the reminder. That was a terrible revolution. This last year I have been going to the EF mass quite a bit, and I was struck, in particular, by the amount of French women, in particular, who were martyrs for the faith in that awful time. And the Franco anti-clericalism seems to persist in a big way in France to this day---if not by killing the priests and nuns, by too often contempt, or mockery.

IT surprised me that even quite otherwise religious Catholics in France seemed shocked at the idea of NOT having a ceremony at the local town hall which is what really counts legally -- a church wedding isn't enough to do it, as in most countries.

France had a rotten system to begin with, but their revolution made it worse.

What fear must have been sweeping the convents in France in the late 1800s again with fear of repressive anti-clerical government.

On a side-note, I have been reading some of your posts, and was wondering what is your preferred form of government? (This is a general question not linked to a specific post).