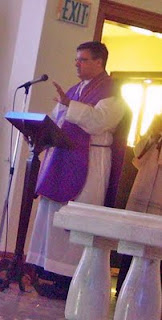 The Amazing Fr. G. had a rather nice 1st Sunday of Advent sermon at the high Mass this morning. He covered standard caution of Advent being a penitential season, and it was important not to follow the commerical lead of following Christmas too soon, out of its proper season.

He mentioned that while in Lent we concentrate on turning away from sin, in Advent we concentrate on little sacrifices to turn us to God. He mentioned to remember that the Blessed mother was at this time, in her last month of pregnancy and reminded people (if they didn't already know!) of the discomforts most mothers-to-be have at that time. But he was saying how Mary offered up this temporary suffering in the joy of the knowledge that she would bear the Saviour of the World. [I guess she must have handled Baby Jesus standing on her bladder really well!)

He also mentioned in the announcements that the Church is to have, on Dec 12th (Our Lady of Guadalupe day) a Rorate Mass -- apparently hithertofore not much done in San Diego -- which given the long standing until recent Latin Mass society, came as a surprise to me.

More about Rorate Masses on my other blog when it gets closer to the time. Mass will be celebrated starting at 5:30 a.m. -- which I plan to attend, unless I am totally dead to the world.
Posted by gemoftheocean at 10:50 PM