Happy Anniversary - or should have been

Today should have been Quentin's and my  2nd Anniversary  - but it was not to be.  I have physically been feeling a lot better.  [Still fighting periods of depression, but it's getting better.]  I wanted to get out today and do something rather than be stuck at home. So I went to Mass this morning, then I hopped the train over to Windsor, and had a nice day out.  The weather was on the crappy side, but just good enough with occasional bursts of sunshine.  Which on a winter weekday makes it a perfect day to go.

For some reason there are TWO train stations in Windsor, only a few hundred yards apart.  My train from Feltham to Windsor only takes 23 minutes and terminates at Eton & Riverside.  Walk about 150 yards and you could hit the side of the base of the castle with a baseball.  So if your knees are good you can be at the admission entrance within a 5-10 minute walk.

When Q was young he had a Highland Westie.  My favorite dog was a Springer Spaniel.  One of the few pleasures we had together was stopping in Richmond Deer Park on the way either to and from the hospital when he was doing his chemo treatments.  People walk their doggies there and we usually saw either one or the either breed, but quite frequently both.  I once told Quentin jokingly that whereas St. Therese mentioned that when she got to heaven she would send roses as her sign, that I would instead send spaniels.  I've noticed since his death often when I am in a place he enjoyed I DO end up seeing a highland Westie -- so I must say it has me going a bit.  Today was no different.  Just as I was reaching the entrance to the castle, two fellows with dogs met up -- and one of them was -- a WESTIE.  So I wonder if Q has a hand in this!  I kind of hope so. 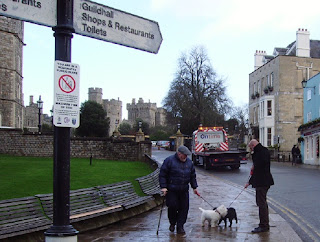 There were FEW people touring in the afternoon today.  I got some photos where there was NO ONE in some of the long shots that normally would have been crowded with people.  For the 1st time I waltzed right in to Queen Mary's dollhouse - and that can easily be a two hour wait or more in the summer on the weekend.  I got to really look at every little bit of it.  And there were some of the "semi-state room" rooms open that are normally never open except in the winter -- essentially some normally more private rooms in the part of the castle that had been burned in the fire.  In particular a red drawing room done to  George IV's taste that overlooks the back gardens, and a "corner dining room" that looks out either towards Eton or the back gardens.  Victoria loved eating there, and apparently the present queen likes to take her guests there for dinner and breakfasts if she has a weekend house party.  The only drawback is you are not allowed to take photos on the inside of the buildings.  I expect besides a potential security issue it might cut into their guidebook sales.

Here are some more photos of the outside:  1st the Round tower -- the oldest part of the castle, though the top 30 feet was added in the 1800s to make the place look, well, "more castle like" as if it wasn't castlelike enough already! 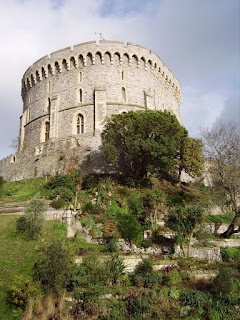 Next up is a bit more of the garden which surrounds the Round tower -- it used to be filled with a moat - but now it's a nice private garden. 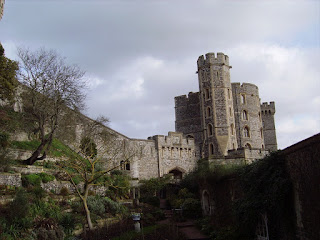 This is a picture of "the bit" of the castle in the  Upper Ward across from the state rooms.  This is what the queen considers her "real home" as opposed to Buckingham Palace which to her is like working "over the shop."  Every day at 11 they have a changing of the guard here in the quadrangle. 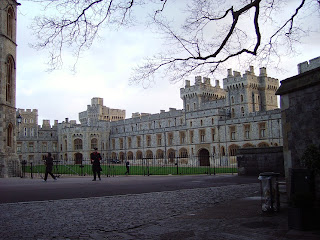 I stayed for evensong in St. George's, which is in the Castle Grounds.  Very splendid church which I've always loved.  I sat in the stall occupied by Haille Selassie when he was a member of the Order of the Garter.  18 boys and 10 men sang.  The Anglicans, I must say, really know how to do evensong. The boys attend the co-educational St. George's  school which is located at the foot of the Castle hill.   Louise, the queen's youngest grand-daughter currently attends, as had Beatrice and Eugenie back in their day.  I especially missed Q at Mass and at Evensong.   He really loved Windsor.  We did get to drive through it a few times when he was still living, but he wasn't well enough for the long walks by the time we knew he was sick with cancer.  But I highly recommend visiting on a winter's day during the week.  You can really look at everything at length without being crowded or have any wait times.  And DO NOT MISS evensong.  There were 20 of us from the public there this evening, and I expect in the summer you probably wouldn't get to sit in the choir stalls.

This picture was taken from the north terrace of Windsor castle.  At the bottom of the picture is St. George's school - the yellow buildings.  The long red building in the train station (Eton Riverside) and near the top you can make out the Eton College church if you click on the picture you should be able to make it out. 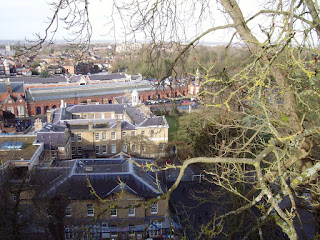 You can't really do Windsor without taking a picture of some Guardsmen, so I did.  You don't see too many guns in England, but this is one of the few places you will. 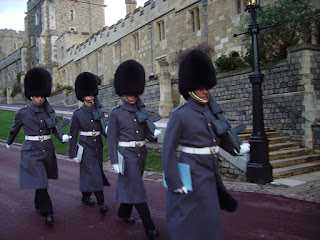 And this following picture was taken just before I went in to evensong.  Really incredible virtually NO ONE is in this shot. 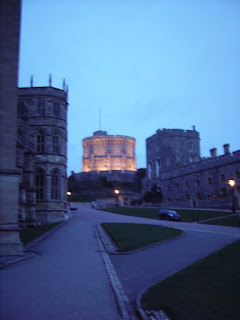 Last week I'd come over to Windsor to catch a matinee at the Theatre Royal of Sheridan's THE RIVALS where Mrs. Malaprop and Anthony Adverse made their appearances.  Nice to finally actually SEE that play rather than just read about it.  Got a cheap seat for only £11 in the 3rd row. 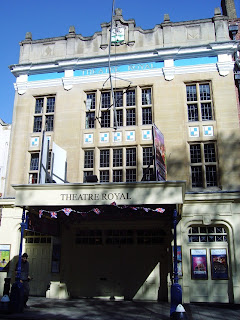 The day would have even better if my dapper Qbunny could have attended in person if not just in spirit.  But I have to content myself with the thought that he is in a far better place.  Missing him terribly. 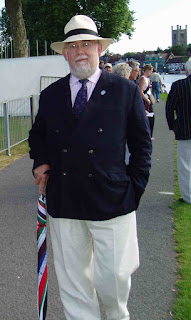 Posted by gemoftheocean at 11:44 PM 3 comments: