Muslims are used to putting their butts in the air 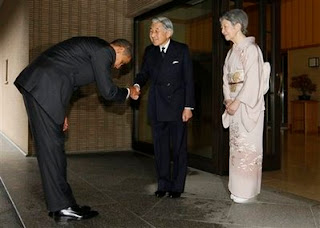 So what else is new with this jackass? I would love to kick him right up the keister with a 10 league boot on. IF someone doesn't beat me to it first. If so, mazel tov.

This is the Muslim boy people said was "looking down for an instant" when he was in Europe doing obeisance to a Saudi potentate. Fortunately, Spanish news had caught the whole thing on video.

I bet there are people in the State Department who'd like to kick him up the ass too. PRobably, including Hitlery -- even she knows better. This duffus never learns. But in a sick way, I think he DOES know that it's wrong -- he does it to rub it in our noses. He and his moll don't think there is anything special about this country. He doesn't see this nation as a beacon of hope and freedom for the oppressed. Come 2012, we'll rub it in HIS nose.

Once again, I'd like to thank all of you who made this talentless hack media creation from Mombassa our "president." How's that dope with the small change working for you yet? I sincerely hope you and yours will unemployed soon, because you are the ones that deserve him and his fallout.
[Update: Packrat informs me the vid. was "removed" by the person who posted on youtube -- HOWEVER, there is more than one fish in the sea. Try here.]
Posted by gemoftheocean at 6:19 PM

Labels: here is hoping someone from the State Department beats him with a rubber hose 6 ways til Sunday, zero continues the world wide apology tour, zero strikes again

Yeps, must be from all the prostrations he continues to do at weekly mosque (I mean terrorist training camp)

Gem, you aren't going to freaking believe this, but the video has been removed. Yep!

The very scary thing is are we even going to have a country by 2012???

Packrat -- figures -- I stashed a copy somewhere. I'll have to see if it can find its way onto youtube. Again.

Somewhere in Kenya, a village is missing its idiot.