So busy and tired yesterday that I didn't have a chance to say 'Happy Thanksgiving.'

Mine was a bit unconventional this year and someday I'll tell you all about it!

One thing I've noticed over the years: sometimes the most unconventional Thanksgivings turn out to be some of the best. Point in case: A year or so after my mother had died in 1995, I was looking 'forward' to my first Thanksgiving alone. As it happened about two days before the holiday, I'd discovered that a favorite stage actor of mine would be appearing in Philadelphia at the Walnut Street theatre in Philadelphia. I immediately sent up an alert to a friend of mine, also single and 'alone for the holiday' at the time, and we were each able within 24 hours able to arrange a long weekend trip to Philly. Her coming from Michigan, me from California. We were easily able to book flights from our respective states and flew on Thanksgiving day itself. We each arrived late afternoon in Philly and had a nice reunion. Well, Thanksgiving day in Philly, the question was 'where to eat' as certainly all our bucks had been blown on laying out beaucoup bucks for hotel, theatre tickets [5 shows, if I remember rightly!] and flight. So dinner at a posh restaurant wasn't exactly what we wanted to lay out for our food budget!

But what does Philly specialize in but luscious Cheese Steak sandwiches. So we looked for a likely neighborhood restaurant not too far from where we were staying and we feasted on Cheesesteak, fries, and a good desssert. That weekend we did all our 'shows' and had a nice little chat with the actor in question who knew us.

One of the best Thanksgivings ever. Totally unexpected. Curiously enough in two subsequent years (though not successive) this exact scenario had happened again. Our favorite actor had two more times been booked for the show given that fell in late November. So it's not necessarily about the turkey. Or seeing your uncles argue over studded winter tires are best over all-weather tires. Or using grandma's china. Or whose football team gets wiped out.

But it IS also about fellowship, giving thanks to God for being alive and being allowed within reason to chart ones own course, and the bonds we form not only through family (they are kinda stuck with you anyway!) but also among friends, and having the mutual love and support. Traditions are important, and fun, and right. But it doesn't always have to be the same thing every year. Often times it's the 'different' ones that stay in the memory the longest.

Those 3 Thanksgivings in Philly will remain so for a long time. As will this one. But this one is another story for later.
Posted by gemoftheocean at 5:30 PM 4 comments:

Holiday Hint - How to Gift Wrap a Cat

Personally, I think this cat was drugged to get it to cooperate.

Posted by gemoftheocean at 8:42 PM 6 comments:

Love this quote from Zero the Wonderpony in his 60 Minutes interview:

"[...] I think that, over the course of two years we were so busy and so focused on getting a bunch of stuff done that, we stopped paying attention to the fact that leadership isn’t just legislation. That it’s a matter of persuading people. And giving them confidence and bringing them together. And setting a tone,” Mr. Obama told 60 Minutes’ Steve Kroft in an exclusive interview set to air Sunday.

“Making an argument that people can understand,” Mr. Obama continued, “I think that we haven’t always been successful at that. And I take personal responsibility for that. And it’s something that I’ve got to examine carefully … as I go forward.”

Oh....now I get it, skippy, I see, the American people were too stupid to understand the wonderous gift you bestowed on all of us with your enlightened grandious ponzi schemes that are unsustainable. Yes, if we could only be made to see the wonders of tripling the entire national debt, we wouldn't have handed your your arrogant backside on a platter.

I think Webster's will be missing out if they don't put your picture next to the word 'hubris' in the dictionary. Nice to know America has its own 'Bagdad Bob': 'NO, The Americans have absolutely NOT taken the city, there are NO tanks behind me... I repeat NO tanks behind me....'

Story here.
Posted by gemoftheocean at 8:04 AM 2 comments: 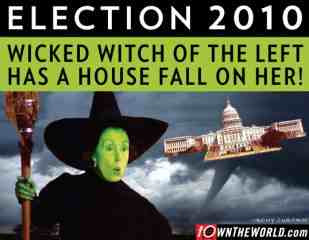 burning democrat flesh in the morning ... it smells like ....
VICTORY.
Posted by gemoftheocean at 3:33 PM 2 comments: