The Pope, The NY TImes, and Obama

A number of Catholic bloggers have been wondering: Why is the NY Times going into full bore tilt re: the Pope and his alleged cover up for a Pedophie.

I came across this article from the Priestly Pugilist, an Australian, and his theory seems plausible to me, that it's a bit of a collusion between the NY Times and Obana for getting back at the church for not supporting ObamaCare and for the Church giving Obama a hard time. The story is OLD news, covered well over a decade ago.

In short I don't think this is implausible. Granted, you have to Be able to prove the NY Times and Zero colluded on this, but I don't think it's more than a half-inch jump. Especially given that Hussein repeated tried to foist pro-abortion diplomats to represent the US to the Holy See - in a blatant in your face move.

If Barrack HUSSEIN Obama treats Jewish Netanyahu like garbage at an official White House meeting, do you think he gives a flip about the pope? It's "payback time" the Thugocracy way. Put the POPE on Front page news in holy Week, so Hussein can run for the sewer with all the back room deals he cut on his DeathCare deal.

Ruin Holy week coverage so the news can be all over the "hypocracy" of the Pope instead of the Message of the Resurrection. SOP for the left-wing.

Else why dredge up and rehash a story they wrote about 15 years ago?

[BTW, for the first time since the White House Easter egg roll was started, which schools WEREN'T invited? Oh, Catholic ones....]
Posted by gemoftheocean at 12:00 AM 4 comments:

Over on my other blog, Bury me Not on the Lone Prairie, I've just posted an item regards the Latin Mass. This breaks things down step by step in a convenient reference. Years ago, Treasure Chest Magazine, of late and happy memory had series on the Latin Mass. Though the articles were written for youngsters, the average adult could probably find a thing or two about the Mass they didn't know. There's a lot of history thrown in. I've given a few tips for first time Latin Mass goers, and I've given some links that make it easy to get to the 1st pages of the articles. Each part of the Mass is was broken out in a different article.

Even if you NEVER intend to go anywhere near a Latin Mass, you might still find the articles of intrest -- just to learn about the history and development in different parts of the Mass. Where I thought a term might be unfamiliar, or had notes about that part of Mass - I put a little explanation after the date the article was published. Any plugs most welcome.
Posted by gemoftheocean at 4:48 AM No comments:

Ann Coulter re: Speech shut down

This excerpt is from her column today

"Only one college speech [out of over 100 she's done -- gem] was ever met with so much mob violence that the police were forced to cancel it: The one that was preceded by a letter from the university provost accusing me of hate speech.

(To add insult to injury, Francois didn't even plan to attend my speech because Tuesday is his bikini wax night.)

If a university official's letter accusing a speaker of having a proclivity to commit speech crimes before she's given the speech -- which then leads to Facebook postings demanding that Ann Coulter be hurt, a massive riot and a police-ordered cancellation of the speech -- is not hate speech, then there is no such thing as hate speech.

Either Francois goes to jail or the Human Rights Commission is a hoax and a fraud. "

It's for lines like "...his Bikini Wax night" that the far left go ape over. That's why they really can't stand her, it's not only that she's usually right about something, it's that deep in their hearts they know she's funny too, but they are so politically correct they can't laugh about it.
Posted by gemoftheocean at 1:36 AM 2 comments:

Labels: don't worry Canadian readers - I don't think those rioters were representative of the vast majority of you - the scumbag left wing yes but that's not most of you

I'm listening to the Rush show right now, and a caller had the PERFECT way to get back at the Obamabastards. ANY company that is behind Obama on any issue -- SELL YOUR STOCK in that company and divest your money into something else.
General Electric? SELL (crap and trade backers -- voodoo "science" whores)
GM? SELL
APPLE? SELL
GOLDMAN-SACHS? SELL
and so on.
I like it -- perfectly legal, and will screw them up.
Posted by gemoftheocean at 6:44 PM 2 comments:

Labels: it's going to get worse before it gets better

Way to go, Stupidak, you sold your soul

to a lying Marxist who promised you he'd see to it we wouldn't end up paying for abortions, by pulling an unenforceable executive order out of his butt for you and the other idiots who showed themselves to be democraps 1st "pro-lifers" second. Stop lying to yourselves, Catholic who still belong to the 'crap party. You're frauds. Baby killers, the lot of you.

Way to go, you whores.

Here's how much your messiah cares about babies and abortions. Somehow he got up off his couch to vote for this instead of voting "present."

Stupidak, you're in his camp now. Live with your rotten conscience when you use our tax money to kill babies.

Is God Still in the Smiting Business

..it seems to me He's mighty out of practise.  I mean I have a whole list of candidates and everything.    At the head of my list are an awful lot of US politicians.

When exactly was the last time He "smote" anything?

Posted by gemoftheocean at 11:02 PM 9 comments: 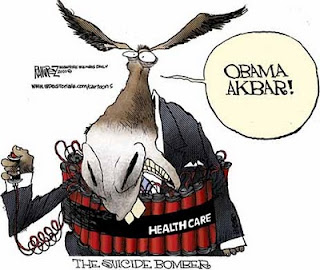 Part of the reason I haven't posted lately, is because I am so physically sick to death of the creeps, liars and whores who are trying to shove ObamaCare down our throats, come hell or high water.

But I can't miss passing on this cartoon. What's it going to take? Pitchforks and lit torches coming for these bastards?
Posted by gemoftheocean at 8:52 PM 6 comments:

Labels: Name someone you wouldn't lose sleep over if they got hit by lightening

How 2 Consecrate a Chapel With Style

Today I got to watch a good part of the 4.5 hour ceremony of the Consecration of the Chapel on the grounds of the FSSP seminary in Denton, Nebraska. I'd read about this ceremony on a blogspot about two years ago, but never expected to see one.

I don't know if EWTN will rebroadcast this, or make a DVD of it (I hope!) - but you can download the following:

Irritatingly, my own internet connection was somewhat "persnickty" so for about 1/2 the ceremony I didn't get as good a picture as I might have, but after I gave Fr. Boyle a "heads up" HE was also able to see some of it, and he posted a blog item and had a better link to it (technology wise) than I had selected. (So I'm saving THAT link, because EWTN's "maze" is a pain in the kazoo to figure out the quickest way to get to "LIVE." - not to mention NOT dinking around wtih some stupid player ewtn tries to foist on you.)


I was delighted to see that Deacon Rhone Lillard, who is soon to be ordained to the priesthood, was MC for Bishop Bruskewitz. There was one little bit I noticed where he got to correct the bishop. So yes, MCs do have to be on their toes, because it isn't every day someone gets to consecrate a church.

I also was delighted to see Fr. Jose Zepeda, was one of the "deacons" who assisted while vested in red, the sacred relics which were placed in the altars. There were also many assisting bishops, so Bishop B. didn't have to do all of them himself! [The Sainted Fr. Shipley tells me of the time some 50+ years ago where HE played a big role in keeping things all "together" for then Bishop Buddy when the Immaculata, on the campus of USD was consecrated, the main altar and all 12 side altars were consecrated that day by the bishop personally!]

There were a lot of interesting features in this Mass which one would seldom see nowadays...there was a procession all around the church, both inside and out when the bishop bless the outside walls with "Gregorian Water" a special kind of Holy water which also includes ashes, he used a hyssop branch to do so -- then there was a special "open sesame" deal, with special prayers said before the chapel doors were officially opened by the porter after the bishop formally requested entrance (reminded me a little of the dude from The House of Lords going to approach the House of Commons chamber to tell them that the queen wants to see 'em ... except no one slammed the door in the bishop's face -- but not too many times you'd see a bishop get to use the bottom of his crozier to bang on a door -- cool stuff!)

Once inside the bishop also blessed to portals, there were twelve crosses blessed all inside the church (the bishop having to climb a ladder to do so), the altars were all consecrated, and the relics put in each altar, (REAL masons actually lend a hand here too, to make sure things get done right in the clean up -- and there is even a special mortar used, and the water in the mortar is also "Gregorian water") there was also a ceremony with making wax crosses on the altar, which I missed a large portion of, because my connection had flaked out.

I was a little disapppointed that I hadn't managed to pick out my own pastor, Fr. Gismondi or the associate, Fr. Dennis Gordon (he has TWO brothers who are also FSSP priests!) -- they were probably in full view but between the camera switching view, and irritable connection "issues" I missed them clean.

I was very amused at the end after a greeting had been read from the pope and an indulgence given to all present, the bishop mentioned the same indulgence would be given to those who attend an annual anniversary Mass of the Chapel's consecration -- the bishop HASTENED to add that that from now on the anniversary date will be celebrated on Jan 22....the Feast of the Chair of St. Peter -- so as not to have the anniversary always fall in Lent! [Maybe this time they DID borrow the concept of the queen having a real birthday and an "official" one - in her case it's to increase the chance of better weather on the "official" day.]

But it was grand, grand, simply grand.
Posted by gemoftheocean at 11:34 PM 4 comments: