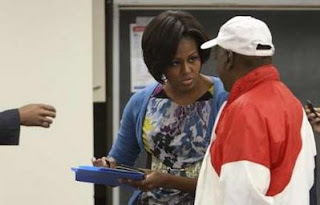 The hubris of these people easily matches Marie Antoinette. Got news for you, missy. The guy you sleep with is going to be in a snit soon, because he won't be able to requistion another 2 oz. of Kobe beef for the backyard BBQ once his minions in the House and Senate get their asses handed to them this November, and you won't be able to do zippity-do-dah.

As per usual the Chicago thugs are kissing her rear end because "you have to bend standards for her." Well, why the hell not. Eric Holder already dropped prosecuting the Panthers in Philadelphia for their voter intimidation. Why shouldn't Moochelle be able to campaign inside a polling place if she wants to? She's "entitled" and the laws don't apply to these jerks.

Well, Missy. As it happened I'll also be out of town on election day, and I happened to vote early yesterday too. Here's a newsflash for you - NO ONE I voted for had a "D" beside his/her name. And I was so ticked off as far as the judges went, if they were appointed by a "D", they got voted against too.
Posted by gemoftheocean at 7:52 PM 4 comments: