This morning I received an email status report re: recent activity by the San Diego branch of the pro-life group Helpers of God's Precious Infants - the email was dated March 30 regards activities that happened over this last week. The following is verbatim from the letter. [I have been out of town and did not hear first hand account, but many of these pro-lifers attend my San Diego parish ] The 'COLFS' mentioned in the report is a medical practice dedicated to helping women choose life. They put their money where their mouth is.

There were 4 prayer warriors and 2 sidewalk counselors this morning. Jose spoke with a young Hispanic couple parked on the curb who had an appointment for an abortion. They were receptive and he was able to give them all the information about what Planned Parenthood was about to do as soon as they went in. He showed them the picture of a 6-week pre-born baby and a 12-week old fetal model. The young lady let Jose borrow her phone to call the COLF's crisis line. Jose spoke with the phone counselor, and then handed over the phone to the young lady who proceeded to make an appointment for Monday morning. She looked very happy, and he hugged them both and gave her a Rosary before they drove away.

Today was Day 18 of 40 Days for Life at Miramar Rd, and the third Saturday of abortions at this mill during the 40 Days for Life campaign in San Diego. Streams of young people poured across the parking lot to pray along the sidewalk in front of the mill, with over a hundred people praying throughout the morning. Most of the prayer warriors were members of the St. Therese Youth Group from Del Cerro. We had 4 sidewalk counselors covering the driveways.

Just after the security guard arrived around 7:30 am, a cab brought in a couple from Mexico. The driver stopped so Roger could give the woman a flyer about the abortionist. When he started to talk about the risks of having an abortion, the woman said in broken English, "Oh no, not here for abortion". He handed her a flyer on the risks of an abortion as the cab driver slowly pulled into the lot.

The first couple that Anne greeted showed some concern about the doctor’s record. She showed them both a picture of what their baby might look like. They were doubtful about going in, and she tried her best to talk with them about how this abortion would affect their relationship and their lives. She gave the woman a Rosary and told her she was worth more than what was offered at FPA. They pulled into the lot and sat for sometime, but eventually went in.

While it was still fairly early in the morning, Roger spoke with what appeared to be a mother and her daughter. The mother was driving. He gave her a flyer about the abortionist and began to tell her about his 9 years of probation. She gave a forced smile while she slowly nodded. He asked the passenger how far along she was, and she said she didn't know. He held up a picture of a 6-week old pre-born baby, and the driver immediately turned it over so the passenger could not see it. Then Roger told her that most women will have emotional trauma because they will eventually find out how developed their baby was when it was aborted, and he held up a 12-week, life-like rubber fetal model. At that, the driver curtly said "Thank you, we don't need to see that" and she rolled up the window and sped into the parking lot.

At the steps leading up to FPA, Anne greeted some women who would not listen, nor take any literature she had to offer. However, one couple she met listened to her words of warning and concern over FPA as they walked up the steps. They went into FPA, but came out minutes later and said they were willing to listen more and take information. They came over to Anne, and she talked with them about how making the right decision will always be a blessing. She urged them to go to Dr. Delgado so they could get a proper ultrasound and be in the hands of a competent doctor. Anne handed the woman a Rosary and gave her a big hug. They did call COLFS and said they would make an appointment for Monday.

For the rest of the day Anne was met with mostly hostility and unkind words. She was able to talk with a young woman who left after having had the abortion. Anne offered her a Rachel’s Hope flier and told her God loved her and that she would pray for her healing. Terry spoke with several women who were very cold and politely listened, but either went in, or declined to get their sister/girlfriend out of the clinic.

About 2.5 hours after Roger first spoke with the couple from Mexico who had arrived earlier in a cab, he saw another cab driving the same woman toward the exit, this time by herself. The driver stopped at the exit, but the back windows were rolled up, and the woman appeared to be in tears. Roger asked the driver to hand a Rachael's Hope flyer to the woman in back, which he did. Then he asked the driver to hand her a blue Rosary, but he jerked his hand away like it was on fire, so Roger tossed it over the seat to her and told her that God still loves her. With the Rosary resting on the seat beside her, she looked away, wiping her tears as the cab driver drove off.

About mid-morning, Terry and Roger were at the front driveway when a 4-door, black car with tinted windows drove in and briefly stopped for Terry. As she attempted to hand him a flyer on the doctor, he drove past her into the parking lot and dropped off the woman who was in the passenger seat. A short while later he drove back to the exit. Again Terry tried to hand him a flyer, but he refused to take it. He then drove forward about 10 feet and stopped at the edge of the street and opened the car door. He leaned his upper body out of the car, beckoning Terry to come over. She approached him, assuming he wanted to talk about the woman he dropped off. As she neared the car, she heard a distinctive "clicking" sound as if a gun were being loaded, and then saw the driver brandish a semi-automatic pistol in her direction. He threatened her, pointing to the gun, telling her if she ever came near his car again, he would use it. He drove away as Terry called the police. The police quickly responded, took statements, and remained onsite for some time waiting for the driver to return. From various information sources, the police were able to identify the man, and said he would be apprehended and charged. The man had not returned by the time we left at noon, and as of Tuesday, had not been apprehended.

(Note to our regular prayer warriors: We believe this was an isolated threat of intimidation to a specific sidewalk counselor because he was driving someone in for an abortion. He did not threaten anyone else, he remainined [sic] in the car, and he made no remarks regarding "abortion protesters" or other such general statements against what we are doing. We do not believe he poses a future risk, but we feel you have the right to know what happened.)

Can this be permanent? Showing the flag for Amerika.
Posted by gemoftheocean at 8:30 AM No comments:

What happens when you can't pay your exorcist?

You get repossessed.
Posted by gemoftheocean at 12:22 PM 4 comments:

Nice to know Japan is looked after 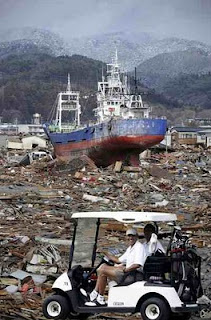 Duffus in Chief is on the case...
Posted by gemoftheocean at 9:19 PM 2 comments: