...with the provision that they bury that son-of-a-bitch 0bama underneath the thing.

Too bad there isn't enough room for all the other sons of bitches who put him in power.

I guess some people need a reminder: Zero couldn't be bothered to attend the long running annual "National PRayer Breakfast" for the 2nd year in a row for "fear of offending." But naturally this closet Muzzie had time to host an kick off dinner for RamaDamaDingDong. 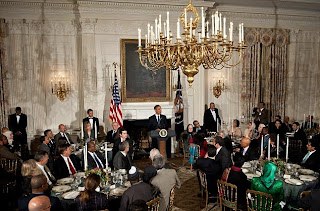 But what do you expect of someone who sat in the "church" of Rev. "Hate Whitey" Wright for 20 years who famously said "God damn America."

Posted by gemoftheocean at 4:38 PM 9 comments: 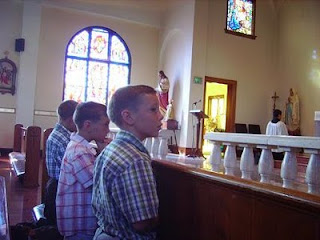 Sometimes when I go to the later morning Mass these 3 boys, looking for all the world like they are throwbacks to my 1964 3rd grade class, show up looking bright as pennies to sit in the front row next to me. 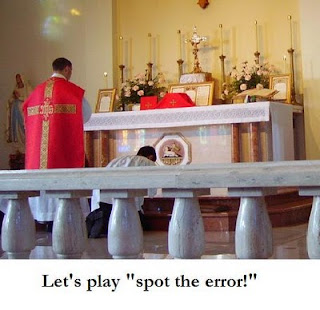 And "they" tell me kids won't put up with the latin Mass.
I don't know if they had fun playing "Spot the error" the other morning. I did also note that 5 mothers had brought their infants in arms...which will make in future for an expanding and sustainable parish.

Posted by gemoftheocean at 10:45 PM 4 comments:

Side benefit number 703 to being Catholic

Last night a friend of mine went down to church for adoration and Mass. After Mass we ran into two nice women, Kathleen and Jeanne from Tehachapi (California) [out in the boonies to most of us in Ca., except for people living there] who were in town for the pro-life conference given at San Diego State University today. Jeanne had lived in San Diego County before, so was somewhat familiar with some of the places and parishes we knew.

They'd wanted to know how to get to the Little Italy area to go to dinner. Then they started asking us about the church and the Mass there. Upshot of it was we all went out to dinner together and had a great time at Mona Lisa. On the drive over there, my friend, Julia, who considers herself NOT a good mixer, was anxious she'd have enough to talk about. How wrong she was! The 4 of us chatted like we'd known each other for years. I think pretty much ANY practising Catholics would find something to converse about.

Catholics take on all comers, and we sometimes "forget" the word means "universal." Kathleen is new to the Latin Mass and I'd told her about the posting I did on my other blog regards Latin Mass for "dummies" guide, so I'm going to mail her the link, and in turn she has some really neat pics of Tehachpie that she showed me that were still in her camera. She and Jeanne had also travelled back east to Buffalo and Cleveland to see Fr. Corapi of EWTN fame and also the Shrine of St. Anne's.
Posted by gemoftheocean at 10:20 PM No comments:

Labels: gee it's cool to be Catholic

Esther tagged me to name 5 favorite devotions - Mass is NOT to be included - and then tag 5 other people and let them know they've been tagged, and then give the person you tagged a link back to the post you've completed.

1. Benediction - my favorite since incense first hit my nose
2. Adoration - nothing is more peaceful than planting yourself in front of a tabernacle with the exposed Eucharist
3. Rosary - because
4. Stations - I do these more in Lent, but still
5. Centering Prayer - [ha-ha, GOTCHA, you didn't really think I'd do something as daft as "centering prayer" did you?] No, really for number 5:
Lighting a Candle or two or three, and giving an on-the-fly intention request to St. Michael, St. Jude, St. Anne, St. Therese, or St. Anthony, or the BVM to take it upstairs for me on speed dial request line. 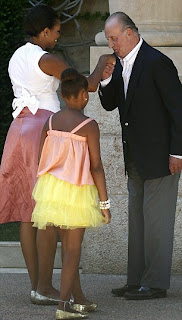 ..that KMart had a "ghetto chic" line? I'm calling fashion felony.
[Now Michelle, please do not be surprised if your youngest acquires the name "Princess Leia" amongst her friends - you did this to her by allowing her to look like some stupid wanna be hootchie ballet tart in training. Can you people confine "tacky" to yourselves? OR is it just asking too much?]
Posted by gemoftheocean at 1:50 PM 4 comments:

Labels: MO do you have to dress like this when you are representing us - oh that's right it's YOU and it is all about you

"Our schools are a disaster zone, churning out to[sic!] many pupils lacking even the most basic skills."

Well, duh. I guess the author didn't have my 1st grade nun, Sister Mary Kevin Ruler-on-the-back-of-the-hand-for-dumbass-mistakes.
Posted by gemoftheocean at 1:57 AM 1 comment:

I always get a little melancholy this time of the year. It would have been my mother's 80th birthday today. Sadly, I didn't make it to Mass as planned today, but will, God willing, attend tomorrow. A few days from now on the 8th will be the 15th Anniversary of her death. I ache for her touch, and would give anything to be able to kiss and hug her as well as listen to her good counsel.

My mother and her brothers and sisters sat for this formal portrait in the mid 1930s. Her maiden name was Shelak - and the photo was taken in Northampton or Lehigh County, Pennsylvania. 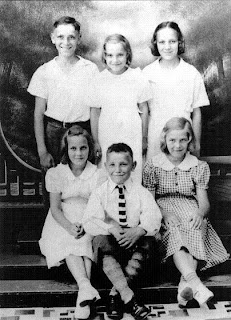 
I expect the kids are in their Sunday best. 4 of the six are now deceased. My Aunt Mary who is now well in her 80s is getting frail now, and the other surviving aunt, my aunt Anna, is advancing in Alzheimers. Not pictured is my Uncle Joseph, who was born a bit more than a decade after this picture was taken. He's only 9 years older than I am.

These children of my emigre (Autro-Hungarian empire) grandparents did quite well for themselves. They all were married and had families 6 of the 7 marriages stayed together, which isn't a bad percentage as things go considering the turmoil of the 60s and 70s. Uncle John was a WWII veteran who saw duty in the Marines on Guadal Canal among other places, he later became a long distance truck driver and was based out of Texas - his 3 children and their families are still in Pennsylvania.

My 3 aunts pictured here all worked in the garment industry and each could sew like a dream. Not a gene I inherited. All were ILGWU members. When you could still get clothes made in the USA and not sized for some sort of pygmy with no hips or boobs. Let me put it this way: They not only knew what a "dart" was, they made them - and could do their own patterns too, and often did. Mom gave up working outside the home when she married my dad (also a Korean Era vet who worked his way up the food chain to be a plant manager for a beverage company). My uncle Andrew was a veteran of the Korean War and he later went to Layfayette College on the GI bill and became a chemical engineer. The youngest, Joseph, [4F from a motorcycle accident and my only uncle who wasn't a vet] graduated from Penn State and became a hardward/software support guru for IBM mainframes pretty much in the late 60s when mainframes where huge gully whumpers which took up whole rooms for about the power of a computer you're sitting in front of now.l He's almost retired. Joe and Andy also bopped around the country a bit, both "homing" back to Pennsylvania - my own family moved to California (after stays elsewhere) when I was 14. And my mother's sisters all lived literally within a block or two of each other and their mother. When we were all little kids together, it was great to be able to bounce around between the 4 houses. Now one of my cousins still lives two doors from his mom (Anna) and his sister and her husband still live close to the old family homes (two still occupied in houses in homes my uncles and grandfather helped build.)

I've written quite a bit about my mother before, but to throw in something a little fun I must say that while dad and I enjoyed fishing (especially in my teen years) though dad and I usually came up with something or other and didn't get totally zipped - mom always had a "string." She just had more patience than the two of us put together! God knows she was the only one who regularly came home with halibut while the two of us were aced out.

Oh, just to taste on of her fish fry ups once more. Happy 80th birthday, mommy.
Posted by gemoftheocean at 3:16 AM 9 comments: