Some people should be horsewhipped.  Let's start with this idiot, Dr. David Starkey who makes excuses that no one ever explained to 'Asian' [i.e. in this particular euphemism it means MUSLIM] Pakistanis that British girls are not to be passed around as sex slaves.  As typical, the Torygraph isn't open for comment on this news item, otherwise they'd eventually have their servers melt from the torrent of invective from their readership. 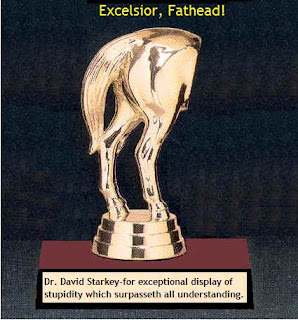 Here is a pull quote:


"The historian said “nobody ever explained” to the men – eight of Pakistani origin and one from Afghanistan – that women could not be treated in this way.

Dr Starkey called for better teaching of English history to create a “common identity” and overcome the challenges of multiculturalism.

But the comments are likely to prompt condemnation just a day after the men were handed sentences of between four and 19 years for the offences.

Liverpool Crown Court heard the group plied five victims with drink and drugs and "passed them around" for sex.

The girls were abused at two takeaway restaurants in the Heywood area of Rochdale by the men aged between 24 and 59. The takeaways are now under new management.Speaking at a conference staged by Brighton College, the private school in East Sussex, Dr Starkey said that the “only way we are going to get to be able to survive as a multi-cultural society is if we re-address the story – the real story – of English history.”

Later in the story he makes this astonishing statement:  “Those men were acting within their own cultural norms. Nobody ever explained to them that the history of women in Britain was once rather similar to that in Pakistan and it had changed.”

Someone remind me WHEN in UK history was it ever 'okay' to pass women around in a rape gang?  I majored in European history, especially British history, and I just don't remember that.

No, Starkey, you dumb bunny.  It wasn't that they weren't taught 'British History' -- it's that they have not developed a sense of morals any civilized human being should have.  Teaching them about Magna Carta isn't going to make them stop thinking every woman not wearing a burqa and accompanied by 2 male relatives is 'available.'

For more disgust and outrage see this story re: how the police knew about this 'Asian' sex gang as early as 2002.

Hey, here's a thought for the Home Office you can apply when you're not busy persecuting the widows of Englishmen:  How about when these 'Asians' come into your country they have to sign a piece of paper which states:  'I understand that whilst I am in the UK I am not to grab women and rape them and pass them among my buddies merely because they are not wearing a burqa and attended by a male relative.  I further understand that if I do violate this law, that I will be taken to the place from whence I have come, have my body wrapped in pigskin, and will be strung up by my testicles and hung until dead."

Start with that.
Posted by gemoftheocean at 7:52 AM 2 comments:

Unless they sent me something yesterday. I was too depressed to even check the mail. So that's 'my' update. Or all of it that I am giving publicly. Because to get into how bad it is is too depressing. A month now since I talked to the MP. NADA. Zilch. Zip. Bupkis.
Posted by gemoftheocean at 7:08 AM No comments: