Father Z gives misogyny a pass-what a surprise, not.

Every now and again the subject of girls being allowed to serve at the altar comes up on Fr. Z's blog.  Not surprisingly he always admonishes people to remain civil.  But in reality if a 'pro female server' argument comes up he is ruthless in applying his standard of civility.  But a man dissing women?  Go right ahead.

I took issue with one person who commented:
"Seamas O Dalaigh says:

25 August 2011 at 10:07 pm
Father,
Of course it should be reversed. The sooner the better.
Cardinal Vingt-Trois’ observation makes sense. Everybody knows that little boys of a certain age do not wish to be involved in anything that includes little girls. Enter the little girls, exit fast the little boys.
There is a clear and obvious link between altar boys and vocations to the priesthood. Although the reasons for a drop in vocations are many and complex, serviettes can only have aggravated the problem.
In places where they exist what do serviettes wear? Alb and cincture? Soutanne and surplice? But these are men’s garments! Is it really wise to encourage little girls to dress as men?
(I wonder how many members of COW, sorry, WOC were once serviettes? Just a thought…)
James Daly?"

In one post (which was held for 'moderation') I called the user on it.  In a follow up post to Fr. Z I said I expect my follow up post to be deleted as I wanted to be as full on candid with him as I could be.  I, not for the first time, I might add, took him to task for permitting the inflammatory term 'serviettes' as applied to women servers.  Frankly, it comes off as something bitchy gay queens say.  I'm not saying the fellow who said it, IS one.  I am saying, that to one who is familiar with gay culture, it sends my own gaydar off the map and comes off as bitchy, spiteful, mean and nasty.
The upshot?  Z deleted both my posts, and let the nasty 'serviette' business stand.
Not that I'm especially surprised... but for such a 'rock star' Fr. Z. can be an awful ass.

update:  Here's what else passes for 'clever comment' on the blog - it's quite okay to make fun of girls who have physical problems.  But I doubt if she was a 'he' 'giggles' would get smug approval.

From Papaefidelis:
"At my parish, there was a female server who walked like a T. Rex (I think she had physical problems), causing giggles in the nave during mass."

Just a girl.  Okay to hurt her feelings.
Posted by gemoftheocean at 2:28 PM 9 comments: 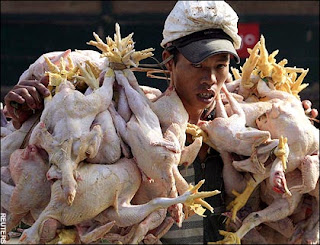 SARAH PALIN: The chicken crossed the road because, gosh-darn it, he's a maverick!

BARACK OBAMA: The chicken crossed the road because it was time for change! The chicken wanted change!

JOHN MCCAIN: My friends, that chicken crossed the road because he recognized the need to engage in cooperation and dialogue with all the chickens on the other side of the road.

HILLARY CLINTON: When I was First Lady, I personally helped that little chicken to cross the road. This experience makes me uniquely qualified to ensure right from Day One that every chicken in this country gets the chance it deserves to cross the road. But then, this really isn't about me.

GEORGE W. BUSH: We don't really care why the chicken crossed the road. We just want to know if the chicken is on our side of the road, or not. The chicken is either against us, or for us. There is no middle ground here.

COLIN POWELL: Now to the left of the screen, you can clearly see the satellite image of the chicken crossing the road.

BILL CLINTON: I did not cross the road with that chicken.

AL GORE: I invented the chicken.

JOHN KERRY: Although I voted to let the chicken cross the road, I am now against it! It was the wrong road to cross, and I was misled about the chicken's intentions. I am not for it now, and will remain against it.

AL SHARPTON: Why are all the chickens white? We need some black chickens.

OPRAH: Well, I understand that the chicken is having problems, which is why he wants to cross this road so bad. So instead of having the chicken learn from his mistakes and take falls, which is a part of life, I'm going to give this chicken a NEW CAR so that he can just drive across the road and not live his life like the rest of the chickens.

ANDERSON COOPER, CNN: We have reason to believe there is a chicken, but we have not yet been allowed to have access to the other side of the road.

NANCY GRACE: That chicken crossed the road because he's guilty! You can see it in his eyes and the way he walks.

PAT BUCHANAN: To steal the job of a decent, hardworking American.

ERNEST HEMINGWAY: To die in the rain, alone.

BARBARA WALTERS: Isn't that interesting? In a few moments, we will be listening to the chicken tell, for the first time, the heart warming story of how it experienced a serious case of molting, and went on to accomplish it's lifelong dream of crossing the road.

ARISTOTLE: It is the nature of chickens to cross the road.

JOHN LENNON: Imagine all the chickens in the world crossing roads together, in peace.

BILL GATES: I have just released eChicken2011, which will not only cross roads, but will lay eggs, file your important documents, and balance your checkbook. Internet Explorer is an integral part of eChicken2011. This new platform is much more stable and will never reboot.

ALBERT EINSTEIN: Did the chicken really cross the road, or did the road move beneath the chicken?

COLONEL SANDERS: Did I miss one?
Posted by gemoftheocean at 11:38 AM 1 comment:

Sorry for the Long delay in posting.,..

Will resume blogging shortly.  Have had a busy summer and not much time to blog.  Well, okay that and my computer had died and had to get a new one.  Details.  Hope Toshiba lives up to its name.
Posted by gemoftheocean at 10:06 PM 2 comments: