Why a pope going to confession is bigtime news to the media, I have no idea, except to speculate that there are few practising members of any faith in the media, much less practising Catholics. Granted popes don't normally do this in a public place, but the mechanics and necessity for confession is the same for every Catholic. 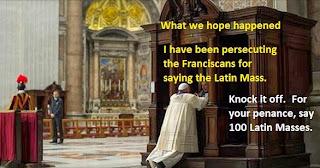 For many of us who are Catholic who have been following the situation with pope's seeming disdain for the Traditional Latin Mass, we have been wondering what ails the man, given the on going persecution of the Franciscan order who has decided that for their community they have preferred to practise the Latin Mass. So this is how we hope the confession went down today.
Posted by gemoftheocean at 9:20 AM 1 comment: