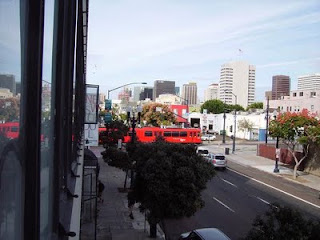 I don't know about you, but I have always been fascinated by old photographs of places, especially when you have a contemporary view of a place. It's fascinating, for me, to see pictures from the late 1800s of San Diego, for instance the San Diego historical society has a few pictures of the Old Town Section of the city when there were just some rancheros, but the topography of the place is still easilyrecognizable. Of course, when the photo took the picture, he had no idea in mind to making a "historic" photograph -- he was just capturing the here and now.

Wouldn't it be interesting, if over the course of time people made it a point to stand in a given spot every year and simply take a picture on the same day of the year (perhaps 4 times if there are seasons) and then do a time lapse "movie" eventually? It would be fascinating to see a city grow, change over time!

What a great idea. We do have something sort of like that. Every summer when we came out to Grandma and Grandpa's we'd take pictures of people, but the background is always there. And, it always changes. The younger generations love looking at these at wondering about them. Well, of course too, they always laugh at the pictures of us when we were kids.

I remember Life Magazine had a running thing. This one fellow had a wife take a picture of him and his daughter on their first trip to the shore each year. Father and daughter (from the time the daughter could stand) would pose, and you can see both dad and daughter getting older, and the swimsuit changes over the years!

A lot of families take a "Christmas picture" every year too, so that's good. What's NOT good is if you have that one family member that never wants to be photographed. I guess then future generations can make up stories about "Aunt Sylvia, who must have had one eye and must have been three sheets to the wind any time someone pulled out a camera.

Once, a friend of ind was getting her infant son baptized and I stood in as a proxy godmother, for a relative of hers that couldn't be there. So afterwards we went out to a nice lunch, and of course, it was in order to have a photo taken. Well, three-year old Jenna was being a total brat and refused to stand next to mom and dad and baby brother for the photo. Finally my friend, Cindy, said "oh, the hell with it, take the picture anyway." And I said to her "you watch YEARS from now, when you go through the family photo album, Jenna will say "how come I wasn't in the picture?" - then you can tell her "Because you were being a brat that day!"

Sure enough some years later it came to pass that they were going through family photos and Jenna said "Hey, how come I wasn't in that picture!!!"

Payback's a bitch! So help me!

Love your comment. That is so true of many little kids. Also, true are the holiday pictures without the cooks! Often my mom or grandmother would be cooking and taking pictures, so there aren't many pictures of them. So sad.

Ha! I AM that one family member that never wants to be photographed. I've done quite a good job of staying out of the Christmas pictures for the last several years, and the reason I like my current Facebook profile picture so much is that most of my face isn't on it.

(It's not that I dislike being photographed that much, actually - but I have a good side and a bad side, and family pictures almost invariably end up being taken from the wrong angle.)

Geez, Stephen, maybe you should "Ditto" my facebook comment "If all the world's a stage, why can't I have better lighting?"

So YOUR the one "What the HEll did Great-Great Uncle Stephen look like?"
"Your guess is as good as mine, rumors were he was nicknamed "cyclops" -don't know how true it was."