Question for my UK readers 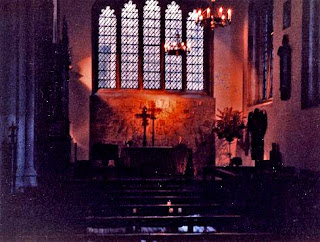 [And anyone else in the know]
This last week Blessed Fr. Blake of Brighton (may peace be upon him, I don't know why he's not a monsignor by now) had a post regards all the broken up stuff he had under his sancturary. My first impression was a) how bone idle lazy whomever the people were who modified (or destroyed, whatever your point of view is!) the sanctuary some years back.
Then after musing about it, it's since occurred to me, that rather than cart it off, "the powers that were" figured they may as well bury it in the church rather than pay someone to haul it away.
Which then brought up THIS query for all of you: Have '"archeologists" or various historically minded people in the UK ever done a survey of what is buried under the flooring of many UK churches? [The churches "they" stole from the Catholics, anyway?]
It occurs to me that when anti-Catholic forces in the UK were stripping those altars and being iconoclasts and destroying everything they could, I wonder if they were as lazy sods as the people in relatively present day Brighton were? i.e. Perhaps they just threw a lot of it under the flooring -- unlike the US it is pretty common over there to have people buried in vaults under the church floor --- have "they" looked , just for the heck of it (or perhaps when certain churches were bombed in WWII) and found old statues, altars, fonts, etc. in some of those vaults under the flooring? Maybe they don't all contain the bones of the dead, but more than a few things thought too heavy to bother moving that they wanted gotten rid of?
I'd LOVE to get a look under the floor of the little church in the Tower of London, for instance. Along with Thomas More's body, I wonder what else was flung under there?
Posted by gemoftheocean at 4:57 AM

Soooo! Maybe this would solve the Jimmy Hoffa mystery. Seriously, a very good question. Burying "debris" under new construction is fairly common even here in this country.

I think that the iconoclasts destroyed stuff, because they learned from the mistakes made under Edward - when Mary came to the throne, all the statues and stuff were brought out again from where they'd been hidden, and they wouldn't want to risk it happening again.

It's also a possibility that this is a way of storing stuff - things are being improved, but you don't want to throw the old stuff away, just in case...

The Anglicans have tended to blame much of the iconoclasm on the Puritans when in fact a lot was done under Edward VI and Elizabeth. Parish records, however, relate the payments made to individuals in order to dismantle altars and shrines and to whitewash wall paintings. Despite government directives local people sometimes dragged their heels over the destruction they were ordered to carry out. Some account of Shakespeare's father's part in the whitewashing of the Doom in his parish church is given in "In search of Shakespeare" by Michael Woods. The Puritan Parliamentarians did play some part, however, The exploits of one William Dowsing who went round East Anglia shooting out stained glass windows are well known. Here I suspect that such images had survived until the 1640s because only the most virulent protestant could claim they were objects of "idolatry" and, additionally their removal would necessitate replacement with clear glass which was itself a considerable expense in that period.
In the last week I have visited East Anglia which is rich in medieval churches and saw considerable evidence of the material impact of the Reformation upon church property from medieval patens in the treasury of Norwich Cathedral to the unfinished bell tower of East Bergholt (Constable's native village) to the horrific mutilation of hundreds of sculpted figures in the Lady Chapel of Ely Cathedral.

The best info I think is in the Duffy book "The Stripping of the Altars" He seems to have all the known info on what got stored, stolen and just vandalised.

Patricius, interesting what you say about the records being detailed enough to include payment for hauling all that away.

Still, one has to wonder...maybe a "Moses in the bullrushes" thing with Miriam offering her own mother as his nursemaid.

And I keep meaning to lay my hands on the books re: Shakespeare and Catholicism. We know his mother was an ardent Catholic.

I think you all are right about some of that stuff (we know books, for instance were routinely burned..and some of the gold plate must have beem looted or stolen by the new "powers." And very interesting what was said about the glass. Did St. Paul's Cathedral in London ever have stained glass, given it was built post reformation?

Still, I can still imagine if here and there altars were dumped into burial vaults.

I can even some lazy so-and sos taking payment for haulage, and then carting some of it off, but then when the payor splits, why make more work? Just dump it under the sanctuary.

It reminds me of a story that on a US campus a long time ago, someone in the middle of the night "made off" with a monumental canon which was on the grounds of the campus. The authorities were up in arms re: who would do such a thing, and moreover HOW, and where it went.

Next to the canon, was a mound of dirt. Finally someone wrote an anon. letter and said "look under the dirt."

Here in the US we've had various waves of anti catholicism -- usually not nearly as bad as what happened in the UK -- HOWEVER there is a famous instance of we still don't know what happened to a building block which was sent and intended as a gift of the Vatican to go into the building of the Washington monument in D.C. [Other nations had also donated such blocks.] One night some "sons" of the KNOW NOTHNG party had swiped it, and it was said it was thrown into the Potomac, and never recovered. Still, given "matter can no be created or destroyed, it must be SOMEWHERE, but where?

Whilst it is certianly possilbe that artefacts were buried in churches I rather that much like beneath church floors in the UK.

Fr. Blake's church, being a Victorian building, has a ventilated wooden floor. As far as I am aware that method of construction would not have been used for the ground floors of ancient churches which would have had stone flags laid not floorboards.