It Makes for an interesting Mass 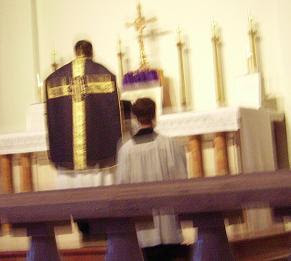 I haven't seen too many Masses of the Dead in the EF form yet. But the delightful Fr. Freddy did one this AM, it was a feria with "nothing on" and it had been requested in memory of a parishioners relative. It's pretty cool to hear a "DIES IRAE" in real life, other than a University classroom.

I can't vividly remember going to one of these when I was little grades 1-2, other than I do have a vague memory of one. An All Soul's day Mass, perhaps? I'm sure there must have been the odd school Mass or two when we were present at someone's funeral if the Mass time coincided with the school Mass time (as it sometimes did.)
I think if a person has ever been to a funeral service for someone they didn't know, you can almost count on that person being Catholic. I can remember in the mid 60s, after the Mass went to mostly English, but with the old form largely retained, before the 69 missal, we went to quite a few funeral Masses. From middle of 3rd grade through 7th, I'd attended two different schools, and we'd normally all go at least once or twice a week to Mass as a matter of routine. Both churches were cavernous -- so the family of the deceased was usually no where near where we sat, even with the whole school going.....which was just as well, given the propensity for the younger kids to stiffle not tears over the casket scene before us, but generally over "Drama queen" soloists. I can well remember a classmate or two being taken to task for getting the giggles. No, it was never me. I'd already been too scared to even so much as turn around during Mass, because our primary school nuns grades 1-3 would have killed us. That sort of nun can help you develop Vicky Lawrence type immunity from breaking out a laugh. Or as George Carlin would say "if you were good, you could whip a face on Rodger, and HE'D get in trouble for laugning, but NOT you. 'Rodger, outside, there's nothing funny here.' IF you were GOOD, you could clear the whole room."
Many of my protestant friends, when Iwas growing up thought it must have been gloomy for us to have to attend these masses. Far from it!! These usually took longer, so we enjoyed the extra time out of the classroom!
[In grade school, 4-5 in Roanoke, Virginia, I had a friend, Teri Jo Myers, who was a genius at getting a nosebleed, which conveniently lasted from the gospel reading to just before the consecration. Guess who would get to go with her to make sure she was okay and didn't pass out? A few years back one of our servers was telling us that in grammar school they LOVED to serve Mass for Fr. Tom P. because "he always told us we didn't have to be in any rush to hurry back to class." I daresay as a boy in Ireland he had a clandestine few extra minutes of bliss away from the nuns with the priest's permission.
What goes around, comes around!
Posted by gemoftheocean at 1:10 AM

Maybe it is just here, but I know that generally when there was a funeral the school children didn't attend Mass. That may be because the church wasn't/isn't big enough to hold everyone. (Sorry about the poor grammar.) I know that older students (including my son) served at funerals, but the whole school didn't go - unless it was for someone all the students knew. That did happen a couple of times.

Could be. As a 1st grader (In Allentown, Pa) they were building a new church, and the school chapel served for the parish church. I don't remember us doing many Masses together as a class -- and it would have perhaps been too small for us to go when there was a funeral Mass-- which is why I can never recall such a mass being said (rather than a memorial Mass for the dead) with the casket present when we kids were there. The chapel was very packed on Sundays for virtually every Mass, and there was a number of them. The new church was considerably larger.

In Roanoke Va. the church was the largest Catholic church for miles around, and dominated the landscape to the north of the downtown area. St. Andrews, quite a beautiful church-- we often attended funeral Masses, albeit we sat a lot more to the back than we normally would have.

In Nashua NH, I attended St. Francis Xavier - a grand old parish, in a then starting to decline neighborhood. "French Hill." Very sadly it was closed in the last 5 years or so - with a number of parishioners bringing suit against the diocese to keep it open.

The original French Canadian community was eventually overrun. Lack of priests in New England now, also had an effect of killing off this once thriving and grand old jewel.

Frankly, going to people's funerals we DIDN'T know made funerals in general easier to handle -- because we then knew what to expect later in life and it was more familiar --a natural part of dealing with the end of life. I think sometimes kids are shielded too much and death is made too antiseptic.

I have heard non-Catholics say, after a funeral Mass, "The Catholic Church is a very hard Church to live in, but a great Church to die in. You know how to bury your dead!."
I think it is a great pity that children are "protected" from the reality of death nowadays. So much of the "nanny state" philosophy seems to have been imbued by teachers on this side of the pond.

You see it in anything that people are aghast when those of my generation mention that it was no big deal when the rifle team brought their rifles to school after classes were over one day so they could pose for the yearbook picture. [NYC school teams, from what I've been told used to travel the subways in Manhattan with theirs in cases!]

About aged 9 or so, we'd go out trick or treating then, in groups of JUST KIDS-- no adults hovering by our elbows -- after dark, with the simple admonitions: "Stay together, and have your *** home by nine, and don't eat stuff til you get home." Itwas enough. The thought of trick or treating at a store was unthinkable.

I read the other day in somewhere on line that someone got admonished for letting their 9 yera old ride the subway alone. Sheesh. When I was 9 my frinds and I could ride all over town on our bikes and no one thought zip about it. It wasn't that we didn't have rules, we did -- just not paranoid ones...and in no uncertain terms "If someone tries to lure you into their car to help them look for their dog, or offer you candy, run like hell and scream for the cops." So we weren't unaware by any means -- but parents were blunt to put the fear of God in you from doing certain things. Instructions realatively few in that regard, but becuase they were relatively few, they were important.

I've heard the Dies Irae performed a few times and it is so powerful, it makes this stoic German teary-eyed!

My kids have been to several funerals already (my eldest is only six). However, my SIL doesn't believe in taking her kids to funerals. I think my nephew heads off to college next year and will never have attended a funeral.

On my mom's side, I have a big Irish family...someone was always dying, being born, getting married!

Hi Swiss,I think going to those Masses helped us to prepare ourselves for when it DID involve our own family. we'd seen the ritual before and so it wasn't alien or bewildering. I have always been composed at a funeral Mass, even with my nearest and dearest. The Mass was a comfort. [Now 3 weeks AFTER the funeral I'd lose it, but that's another story.]