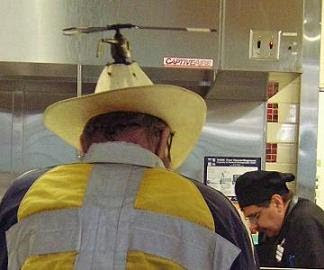 So help me, I so wanted to take this picture from the side, but given what this guy had on his head I was concerned about him launching some napalm he'd saved since 'nam.
I took this picture downtown after work yesterday. He was not out of place. A fairly young homeless fellow was sitting just outside the Albertson's, perched on a recess of the building near the door. He had a yogi bear style hand muppet, which casually asked me if I had any spare huckleberries. So help me, if I had, I'd have been tempted to give him a few.
Posted by gemoftheocean at 1:35 AM

Makes one wonder. Maybe the guy with the helicopter is doing Halloween early.

My thought was he was trying to fly the hell out of there to the moon. East Downtown is not exactly a "happening place."