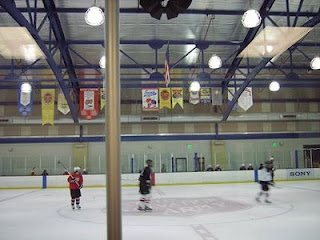 Yes, Virginia, there are small outposts here and there where "the youth" actually listen to adults and stop doing whatever it is that they're doing that they're not supposed to be doing. This past Saturday, I'd gotten down to the Kroc Center early before it was open for swimming. So I hung out for about 20 minutes in the ice arena where some older teens were playing pickup hockey. [The teams are ALL named "the Saints."] The center has a policy on "no foul abusive language" etc.

Ice hockey, being the sport it is, has more than a little incidental contact. Right at the end of "their time" sure enough the inevitable happened. Someone had a golden shot right at the net, so he came flying towards the goal. Someone else managed to check him in really hard to the goalie, and the goalie went into the net. There was some pushing, shoving, and all of a sudden both benches emptied and three small shoving matches took place. An adult called out "Cut it out." They sorta stopped, then started again. Adult yelled again, "I said 'CUT IT OUT." They cut that crap out. No bloody noses, though granted a few dirty looks. Both teams "huddled" for "good game" and nary a high stick from behind thereafter. Whether or not someone drenched someone else's clothes in the shower afterwards, I couldn't tell you.

I was somewhat bemused, and later asked someone about it. "Well, they want to play, and if they fight, they're barred from playing."

The ALL time ice-hockey fight I saw was a good 25 years ago during a San Diego Gulls game I think my mom and I counted a good total of some 13+ guys in the penalty box after the fight - including one of the goalies. I think there were 3 guys on one side, and about the same on the other after all the penalities were assessed!
Posted by gemoftheocean at 6:24 PM

The joy of consequences!

And these guys were pretty big teens too! Not that I've seen many fistfights, but certainly never one that involved an adult merely saying "Cut it OUT."