I felt so virtuous today... 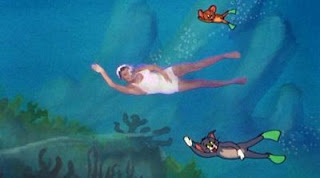 I was up before the crack of dawn to go swimming.

I'd joined the Kroc Center last night, an amazing facility with 3 pools (one rec., one olympic, one therapy), an ice skating rink, gym, fitness center, theatre, library, classrooms, and God knows what else.
In Jan the 99 buck registration fee was waived, so it was just 3 months in advance (at 25 bucks a month) and then you can go month to month after that. The widow Kroc (Ray Kroc had founded McDonald's corp) donated heavy coin to get it built. The rec & olympic pools are outdoors, but when I went in the pool though the air temp was in the low sixties, the water temp was a pleasant 84. Nice endorphin rush, and still had time to have a nice breakfast afterwards and get to work on time. Of course I felt like crashing totally at 10. So now I have no excuse for not getting enough exercise. Though I don't think I'll be going rock climbing anytime before Hell freezes over. I know my limits!
Posted by gemoftheocean at 2:51 AM

A Kroc Center is opening here this spring with the pools and all the rest of the stuff. We just bought a new gym membership so we won't be using the Kroc Center but it looks like it will be really nice...

You identify with Ester Williams, eh? (I can't see you as Tom or Jerry...)

I went rock climbing once.

Stephen, I am smart enough not to go that first time.

Adrienne: Yeah, I think I'll get some good use out of this. I went again this a.m. and did a 1/3 mile. I'm pacing myself!

I was about 12. It was part of some activity weekend I went on with school (my idea of hell... well, not quite, my idea of hell is sharing a jacuzzi with Kerry Katona, but you get the idea.) Basically, you could participate or look like a wimp. Had I been any older or wiser, I'd have chosen to look like a wimp. It's not something I've felt any need to do since.

Stephen, You're a good 6 foot 4 or 5 at the least. You can't look like a wimp! Not even if you slouched. Although, granted, at 12, your growth hormones may not have kicked in!

But Stevie honey, you're at least
6'4" when you stand on your character and talent. :-D

Uupdate: 1/3rd of a mile yeserday...1/2 a mile today...and 4 billions miles before Sveltitude!

I'll be sorta swimming, driving in the mountains of new snow on my way to Mass this evening--sheesh, I want to go swimming! Love the picture.

Sounds like a nice pool! Several have opened around here in the past few years...the kind that are the indoor swim parks with waves and oodles of slides. We haven't gone to any yet since I know if we do go, the kids will be asking me all the time! We take them swimming about every weekend in the summer, so they aren't deprived, but I could really use some swimming to get back in shape.

Can't say I've ever been rock climbing with all the gear and such. Hiking maybe. When we lived in Seattle it was all the rage, but I didn't quite get the thrill.