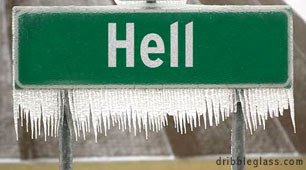 it has come to my attention that the San Diego Union Tribune notes in an October 6th article that Bishop Brom will be asking clergymen and all lay Catholics in the diocese to make a special donation to cover the nearly $200 MILLION dollars to be paid out to the alleged 144 victims from the priest abuse scandal in this diocese. He wants each priest to donate a month's salary. And for retired priests to kick in too. Pardon me all to hell and begone, but this smacks of blackmail. What's he going to do to the priests who aren't rolling in dough to begin with who don't want to kick in? Currently a pastor grosses $1,535 a month, and an associate a little less. Peanuts. And their boss wants 1/12th of it.

You can see the bishop's letter here. My first thought was of the 1st cut on the Aerosmith's Greatest Hits album.

Mind you, this was the guy that caved in and said yes to everything, rather than fight some rather questionable allegations in some instances. He also decided it was a brilliant idea to declare the diocese bankrupt. This blog does not in any way mean to imply that there weren't victims who deserve to be compensated. But I am saying that this bishop has shown monumental ineptitude. Other dioceses, like Pittsburgh, settled for 80k per victim. Here it was $1.3 million per victim. DUE TO INCOMPETENCE. He wants to heal this diocese? He can start by RESIGNING. Then "we'll talk."

Until then: BUPKIS
Posted by gemoftheocean at 10:24 AM

Thanks. That letter is the biggest piece of hubris I have EVER seen. He didn't even have the grace to say:

"I'm sorry due to my monumental stupidity, we are in 15Times more difficulty than we ought to have been."

This comes off as nothing so much as the bishop's buddies saying: "I know, to cover YOUR a$$, we'll offer to be magnanimous, then get all the other priests in the diocese to pony up through guilt - then you will remember about favoring us with good assignments etc?" Even if that's not how it went down, it smacks of not even caring one whit about the appearance of propriety.

This stinks as bad as anything and even worse than I have seen in corporate America.

And that last paragraph, downright promising that this touch will be going on for years and years.

This ought to help vocations go up:
"Hi, we've screwed up in more ways than one, thank you for wanting to dedicate your life to the church, now bend over and grab your ankles, we'd like some of your paltry salary donated for the bishop's incompetence fund."

No priest becomes a priest for the salary, but this is an injustice.

SPUC is: Society for the Proctection of the Unborn Child.

Gem (and you are one, indeed):

While driving home last night from a family wedding in Coronado, I was talking about this with my husband and his uncle, a priest in the Archdiocese of L.A. We were all shaking our heads in utter amazement - the word chutzpah also came to mind.

As you know, we're now facing a large payout in the Diocese of Orange. That was my husband's first comment - "How much LESS would this have been if Tod Brown wasn't being stupid?"

No kidding. You're marginally better off than we are here....but not by much.

How's this for one:
A number of years back some guy in the seminary claimed that x,y,z seminarians had done all sorts of nasty things to try and compromise him. Did the diocese EVER CHECK the guy's OWN service discharge papers? Wouldn't it raise a slight red flag to anyone with half a brain if you find out the person in question was thrown out for homosexual activity? Why would you admit them to a seminary in the first place? Oh, but that only happens if you have a brain to check in the first place. They shelled out a lot of money over that one.

It happened under the previous bishop's watch, when we still even HAD a seminary, which we no longer do.

I agree the with ballsiness of the whole thing. Maybe some of these men should get a second job at Wal Mart to pay for this kind of thing and let the priests alone to say Mass and try to tend to their flock.

And, I agree COMPLETELY with the idea of catching this in the seminary. What the heck fellas, come on. You have to have some sense, don't ya? My family is from Hudson, WI, and very involved in the local parish where a young rad trad priest, fairly new out of the seminary, *allegedly* abused children. When a local mortician found out about it, the priest killed him and an intern at the mortuary. A few years later, when police finally figured out the score, the priest who had been REASSIGNED to another parish, hung himself. The whole thing is just depressing beyond belief, but what makes it so bad is that this guy ever made it into and out of the seminary (BTW, in all seriousness, we have a great and vibrant seminary here.)

No shortage of priests is worth rubber stamping these guys.

We had that happen here in our diocese and because of a powerful Democratic lawyer, they bilked our diocese for a huge settlement. We are now paying the price. They care more about $ than souls and it shows. To take from parish priest.....almost communist behavior there.

You got that right, Thorn - the ones making out here are not the victims, it's the damned lawyers.

"monumental ineptitude" I could not have said it better myself! Priests have already taken an unreasonable burden due to the Priest scandals,--and now they should be "fined?" How absurd! I love our Priests--we need to give them more--they deserve it!

Darned skippy, Tara. Any decent man who puts on a collar today is a hero to me. Always was, but especially so in these trying times.

My own priest, whom I assist at Mass is nearing 79 is about 5'4" in stature (if he jumps up and down a little) but he's always been 10 feet tall when he stands on his character.

I always wish him a "Happy Father's Day" when FD rolls around in June.

You are so funny... and smart too. I have to get my husband to explain half of your subtle jokes. Keep up the good work. Some of them are still over my head... but that is OK!

Adele, how kind of you to drop by!
I'm not sure which joke you didn't get on the 1st go around...but I expect it was the indirect reference to "Dream On." :-D For once the Amazon music clips failed me. I needed the 2nd 30 seconds for the audio I wanted.

And I'm glad to see on your blog that now you know the extent to which Therese has hearing loss.
I think it's terrific that she'll get the help she needs, and it's a glass half full story. You can really count it as "all the way full" when you think about it.

Thanks Karen,
Yes, it is looking up as regards Therese's hearing. I'm starting to see things from her viewpoint a little more. I noticed her today sitting looking a little lost while her brothers enjoyed watching a Charlie Brown movie. It must be kind of lonely in that semisilent world of hers. We are really looking forward to getting those hearing aids for her. What a blessing to be able to get them for her.