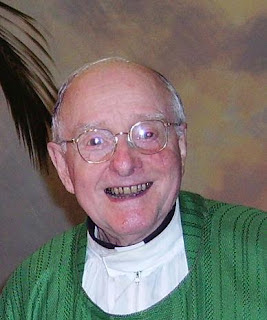 Father was ordained on May 5 of 1954. Father's birthday is on the 26th. He graduated from the major seminary in San Diego county, when we still had one. He later got his PhD in Philosophy from the Angelicum. He's such a smart guy he was able to shave a year off the time it normally takes to get a doctorate - and this was when you had to take all your classes in Latin and do all your tests in same and defend your dissertation in Real Time Latin. He's entitled to one of those fancy schmansy 4 cornered academic birettas with the piping, and he could wear a ring like a bishop just for the heck of it, if he wanted to. But he's not that kinda guy. [Ha-ha, if it was ME, I'd have gone to all the graduations at USD and worn it, just because the bishop doesn't have one of those 4 cornered jobs.]

Years ago, when Father's mother was still living, the ever sociable Mrs. S. let me in on Father's B'Day, which had hitherto been a semi-state secret. Bless her. I recently wrangled a nice copy of a photo of Father taken after his 1st solemn high Mass. Tempted as I am to post what Father calls his "little Lord Fauntleroy picture" I shall refrain, lest one of Father's confreres runs across this blog and taunts him with it. No sense in getting the snot beat out of me. It's kind of hard to ask someone for absolution when he's choking you to death. All I can say is that he DOES look like LLF and no one is smiling. It does look like they've buried a Cardinal or other similarly exalted personage.

Given that Father has said Mass pretty much every day since he's been ordained, I estimate that makes about 19,500 Masses. Adjusting for binations and days off sick, I bet it still works out to at least once a day. Given that saying Mass is the most wonderful thing a priest can do, I'm glad he's done it all those times. I honestly don't know why a priest would NOT want to say Mass at least once a day.

I've also refrained from posting a pic. of him in Gaudete or Laetare vestments. He hates it. The women in the parish love it. The men sympathize. That particular color on him makes us think of a nice Easter Bunny. Father does not relish the compliment. I particularly like those two Sundays. Think about it. How often does a priest get to bust out that color? Twice a year, and it took him 50 years of priesthood to get to 100 times. It's like spotting a prothonatory warbler. [Father's a good singer too, BTW.]

Fr. is a native of Chicago, and is about the most down-to-earth man you'd want to meet. He taught at the University of San Diego since the late 50s and just retired a few years ago. One alum who always took the time to come back and visit is a Saudi Prince he had taught years ago. Father taught close to 3 generations of students. I.E. there were cases of him teaching a man and then that man's son or daughter - and in theory could have taught man A's grandchild.

Father says a Monday through Friday 6:30a.m. Mass at Holy Family in San Diego. And on Sunday he supplies the ICC 5:15 Mass in Old Town. Not to leave out Saturday, he says Mass at home. I've assisted him at Mass one way or another for a little over 30 years. He's taught me so much. I think I finally taught him not to buy software or hardware versions of x.0 anything. He already knew not to draw on an inside straight.

I took this picture of him last month, and I think I've finally caught him with his best, and usual, expression.

Since this blog is, AFAIK under the radar, and I'm not "broadcasting it" around church [at least no one at Mass has said "Yo, I caught your blog"] I will not "name names" as he knows who he is. And Fr. S., if you read this, you might want to give me a shout out back. You could always style yourself "Bill, of the Amazing Wolverine Tribe" and I think I'd figure it out.
Posted by gemoftheocean at 7:29 AM

Many congratualtions to him...& lovely right up!

Happy Birthday--and many more till your 104!

Ordained just a couple weeks after my parents were married. Holy cow.

Ma- my parents may have met about that time too.