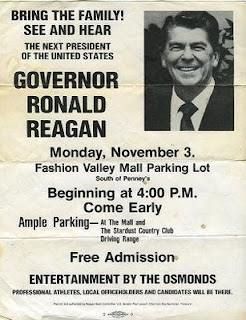 ...from among my souveniers.  My "I was there" evening.    It was the last campaign stop for Ronaldus Magnus in 1980,  San Diego being a lucky city for him.  I remember how excited my mom and I were to go to the rally - such a thing we'd never been to before.  The site was slightly to the east of where the trolley station in the Fashion Valley parking lot now sits. I remember the heady rush of anticipation as we waited.  The (relatively minimal to now) security checks by the secret service.   He was hours behind.  My mom had scrawled on the back of this flyer "Ed, we went to the rally, we should be home around 6:30."  I don't think we made it home until at least 10.

He was nearing 70, but he had fire in his belly, as he had all through the campaign.   Basically his message was that Jimmy Carter could put his "Malaise" elsewhere.

It was also the memorable night, he'd finally had it with the handful of hecklers that had traipsed around tagging onto every campaign appearance.  He told them to "shut up."   I found the clip below, finally.  Locally, they played that clip over and over on every radio and TV station.  The crowd roared with delight.  A candidate with moxie.   He'd said he'd been wanting to say that for a while, and figured his telling them to "shut up" wouldn't make a difference at that point.  Media didn't have time to spin it.

And the best part of it was I *KNEW* in my heart he would be victorious,

We’d be most grateful if you would post about three forthcoming Latin Masses in Ireland:

Also, we’d be very grateful if you would put out blog on your list of blogs.

Do you remember any of the songs the Osmonds performed :)

Swiss, Ronald Reagan was so mesmerizing I didn't even recall they HAD been there!!! A space alien, big foot, Judge Crater (ask your grandmother), Jimmy Hoffa, John Lennon, and the Queen of England* could have been on that stage knocking back moonshine and pizza and I wouldn't have noticed. Not even if the queen had a tiny bit of cheese hanging between her teeth and was trying to get it off. the more I think about it the less certain I am the Osmonds made it that night. Donny could have sung Innagoddadavida and I wouldn't have remembered. [A thought that makes me practically pee myself thinking about it.]