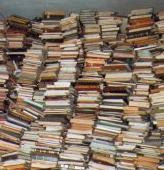 A big howdy to Ebeth who tagged me.
This one made the rounds a while back, but it was quite a fun one.
Grab the book CLOSEST to you,. [No cheating!] Go to page 56 and [I had to go to page 57 because there was just a picture on page 56] and type the 5th sentence. And then the next 2-5 lines after that. Name the book. [Duh!] Tag 5 folks.

When I saw the instructions, I thought, "oh, gee, there's only one book within reach..not even two equidistant to select from, and given the book, it's bound to bore." But how wrong I was.
Especially when it's taken out of context!
"This element of risk provides excitement for me, and I hope also for the onlooker."
Wow.
:-D [It wasn't *really* in bold, but I had to coke back laughing.] Wow. Too bad I have to give the next couple of lines:

"Flowers are inherently transitory and delicate. They live and change almost as you look at them and in a day or two they may have withered away. In this study I have tried to capture some of their ephemeral nature."

Which is quite a nice book to pull down if you're trying to refresh the memory on technique if you haven't done it in a while.

Now the fun part. Tag five people and tell them in their comboxes.

And if you're saying "dammit I want to do the meme" I would have tagged Dr Peter, and if he reads this he can use the combox and post as Peter of the Amazing Wolverine Tribe.
[Stephen? combox is open dude. Do you have any friends who work for the Royal Shakespeare Co. A young American College student I know who's been doing a semester in the UK will work under the table licking the dust off the stage with her tongue in exchange for a cot and a hot meal now and again! One hesitates, because you might have the script of "Taboo" next to you. :-D]]
Posted by gemoftheocean at 7:47 PM

Thanks for the tag Karen!

You are unbelieveably funny!

Thanks Journey. I aim to please in that department.

You are right Karen but I'm too lazy at present!

Karen, I've tagged you for a meme too.