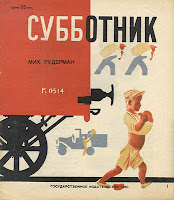 It seems ironic to me that people can propose forced "voluntary service" hours. It seems to be an oxymoron at best. It may be well intended for didactic purposes, but in the long run I think it has a contrary effect.

Many of our Catholic schools, for instance, now have "required service hours" in order to graduate. In other words, you must get your "ticket punched" for doing so many hours at a nursing home, helping sister clap the erasers together, doling out soup in a soup kitchen. Now all these things may well be noble endeavours, but what *precisely* is learned by making someone do something that is supposed to come from the goodness of one's heart?

In other words, instead of learning by example from mom, dad, the community at large, doing something good is now done as a quid pro quo. I.E. "You do something good for X, and I'll let you:

Graduate,
Have a better parking spot,
Get your name in lights on the company bulletin board after the next subbotnik."

Yes, that's right - because no matter how well intended, it's a subbotnik. Just like Dear Uncle Joe made "the workers" give one free day to the state.

It makes a mockery of REALLY doing something that comes from the heart. You do good for the sake of its own intrinsic worth. Not because you'll get something tangible.

Ditto this idea of "Getting a monetary reward for doing the right thing." It used to be in school we were taught (in the parochial school anyway) that if you saw a wallet, you returned the wallet, you didn't expect a monetary reward...you did it because IT WAS THE RIGHT THING TO DO. Virtue for its own sake. You didn't return the lost dog for the "reward" - you returned it because you knew how bad you feel if your pet was lost, and you wanted to do right by the other person. [I'm not talking about accepting what it might have cost you ... i.e. you were reimbursed for the dog food or whatever if you needed it. ] I'm talking about the $1000 bucks if you return my dog" stuff that people seem to expect merely for doing the right thing. And ditto kids who get paid "X" if they get good grades in school. The knowledge gained should be reward enough. You learn for the joy of learning.

Don't put it past evil minded people to use the collective guilt trip of not doing voluntary service as a way to push their own agendas either. Sure a parochial school may be thinking that a few hours in a soup kitchen is a good thing. But don't expect others not to co-opt this notion. If I'm not mistaken Maryland schools, public ones at that require "service hours." IIRC some of these "service hours" can be for things like Planned Parenthood. Comprende?

I also wonder where Nobama is taking HIS "dear leader" agenda with his wish for enforced youth mandatory service scheme.

What was it the Jesuits said? "Give me a child until he is seven, and I will show you the man." Don't give your children over to be indoctrinated by anyone. At best, [when a cause is good], they can still easily pick up the "quid pro quo" mentality and don't really do good works from the heart. At worst, their minds can be poisoned into a lockstep "cadre." And question whether even meritorius "required service hours" are teaching your teen something beyond a jaundiced view of REAL volunteerism.
Posted by gemoftheocean at 10:00 AM

"It makes a mockery of REALLY doing something that comes from the heart."

I understand your point of view, but with children and young people a little initial push doesn't hurt.

My son was one of those many students required by his Catholic high school to do community service. I think in the course of doing what he had to do he came to learn that volunteering to help others is indeed its own reward, and now that he is in college he is active in a number of charities, such that I have to periodically tell him to knock it off and concentrate on his school work.

Virtue, I think, is a habit that, like all habits, has to be learned. The idea that we need to stand aside and just let the natural goodness come out strikes me as a little blinkered.

That's the point. One thing to take YOUNG children, oneself as an example, but beyond a certain age...like requiring high school kids, many of whom are in the working class who have jobs and who do have a high study load, to require 50 extra hours sounds trivial but isn't. Which is what many of these schools do. I think at that age many youngsters DO become jaded about punching that ticket.

While I see the point you are making here, sometimes a little push really is all that is needed. For me, I was required to do community service in high school, and it changed my entire career path. With so many options to teenagers, especially these days, required service can offer them the chance to look at opportunities they might never have considered on their own, and might end up changing the course their lives take. As with anything in life, you won't reach every teen with this type of requirement- but if you change the perspective of even just a few, they can make changes in their communities that will have ripple effects for years to come.

Ah, but non-profit gal -- who also gets to decide the worth while endeavours? The state school? These are the people who when teachers in California opt out of the union and go "core financial" because they donate to political causes campaigns against their convictions STILL get to choose where the money goes by being able to force you to donate to THEIR "Worthy cause."

Take a dim view of those who set up fifedoms where they stand to gain monetarily, either directly or indicrtly. How much you wanna bet if a teen wanted to "voluteer" putting a church bulletin together, that wouldn't count as "community service" but helping out at Planned parenthood would be?

Encourage youth to volunteer and try new things - but it seems to me young people get compelled enough as it is. They ought to be able to pursue their studies, part time job (which is necessary for MANY), take care of family members (maybe it's a one parent home and mom/dad is disabled and needs a lot more assistance.)

Teens have some rights too.

As a parent, both my girls had "voluntary" service hours to complete in high school--it is such a pain for the parents having to drive them everywhere, or buy the chocolate bars they sold for charity, or con your relatives into buying them--so they can meet the "voluntary" quota.

If schools think kids should do community work--they should call it such, mandatory--not voluntary!

Anyway, my husband is really good at volunteering all of us (me, our three kids) for the Scouts and Church . . . of course, he truly does it because it's the right thing to do (and after sixteen years with him, I've learned this as well - wasn't necessarily taught it at home) . . . the kids finally get it, too. Still. In the beginning of my husband's forced agenda, we all felt pissed, now we willingly volunteer our time. But, it took time. I do not agree that schools should mandate volunteerism. They should foster it. The best way to get people to step up is: ask for help. It's really the only way - and it's honest.

And, I agree that the schools forcing it for their "causes" as you say, could be very bad!!

Journey: You said it: FOSTER!!!

Exactly right. Create an environment where the opportunities exist. Some will do it of their own accord, and when they talk about it to friends, they'll get involved too. Or parents (or a parent!) will do it, and their kids will take it as part of life like going to the store, church, scouts, school.

Most people don't sit around saying to their kids "how I'm doing this to teach you a lesson, blah, blah, blah...." X% of kids will instinctively say "Oh, yeah? Like trying to get me to read Wuthering Heights? No thanks!"

*internally* of course, by a certain age their edit button is on, and they'll nod yes, do zip but feign agreement.

Except for "journey of truth"I have yet to see anyone suggest that it be the PARENTS that foster this idea. Why has it become the job of the school? The schools should try teaching instead seeing as how our children are at about #26 in academics in the developed nation

I'm also concerned about teenagers, in particular being required to do this sort of thing to get their "ticket punched" to graduate from a Catholic high school.

When I was in school, and still today, MANY kids had part time jobs (because they did need the money), then they've got study, on top of the school day. When do they get a chance to have some fun? Also, our Catholic high schools are largely college prep, and to get into a good college many of the kids take AP classes, which require even more work in order to get college credit. 4-5 AP classes is not uncommon for good students competing for top colleges now. They almost *have to.* I don't know when some of these kids sleep. [And add to that the idiotic idea of WAaaaayyy postponing the sacrament of confirmation: "Gee, let's make them wait until late in high school when they have studies, jobs, "mandatory volunteering", and ANOTHER 2 hours a week to take this stupid year long (or two) class...." Thank God I hit the era of "4 extra classes and DONE." at age nine. No fuss, no muss, and the protection and grace of the sacrament from an early age before I even knew what cynicism was!

Voluntary work should be just that-perhaps guided a little by a parent. Instead of selling cakes for some dodgy cause kids could be taking a stew round to a sick neighbour or babysitting for a tired parent.
All this forced stuff is trite and like you say often not all that good!

Ah, just thinking about it I suppose service to family and neighbour wouldn't count. No agenda to fulfill. (Sorry I am a cynic)

I have a hard enough time getting kids to do homework, let alone service hours...and clownbama wants to make this mandatory, b.s. that's not happening :) it's anti-constitution.