Why I Have no Truck with "Centering Prayer" 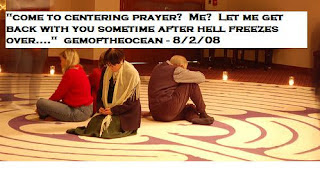 In my combox to a previous meme, Madame Evangelista asked me why I eschewed "centering prayer." I thought the response was worth a separate blog entry.

The reason I want nothing to do with it in short is because I believe it is, at BEST mildly gnostic, and at worst leaves one open to the work of the devil.

My own first thought on hearing about it was "centered on WHAT?" In reading about it, it seems centered in eastern religious or cult practices of letting the mind open up. Well then, open up for WHAT? It seems far too open to centering oneself into some sort of heightened consciousness. Also from what I've read in unstable people can leave themselves open to being preyed upon by who knows what.

A while back, in This Rock, a publication put out by Catholic Answers, there was a fairly succinct article on the topic. A google of "centering prayer" will reveal others. This stuff is far too "New Age" for me - and I steer clear of New Ageism whenever and wherever I can, including the "centering prayer" group at my own parish.

From anecdotal testimony of a friend of mine, she was told that she wasn't "developed enough spiritually" for the "centering prayer" group, by one of its members. At the very least that reeks to high heaven to me of gnosticism, and plain nuttiness. I could complain of course, but it's not like the pastor who leads the group, isn't a fair haired boy in the diocese. [And no, it wasn't the pastor who said that to my friend, and no I'm not going to tell him, because as far as I'm concerned it isn't worth discussing matters of the soul with him!]

In fairness, at least he does Benediction. So that's something.

Is everybody who is doing "Centering Prayer" out to lunch? Not necessarily, but it's not something I'd want to touch with a 10 foot pole. I'm as narcissistic as the next person, I don't need some "prayer group" directing me even MORE "centered." - wherever the hell that is.

To my own mind:

You want to "center yourself" WITH the Church, WITH God, WITH the Church Militant, WITH the Church Triumphant?" Try the Liturgy of the Hours (you can do it with a group or alone), Benediction, the rosary, Holy Hours, and plain old "making a visit to the Blessed Sacrament for a few minutes on your way past church."

Many thanks for taking the time to answer - and for giving it space in a post all by itself, which was a bit unexpected!

Your last point was particularly interesting - it hadn't occurred to me that some might view centering prayer as a replacement for other forms of prayer. I'd imagined it was something people did in addition to their other prayers.

Thanks again - am off to read the article on 'Catholic Answers' that you've kindly pointed out.

And yet more thanks - the article was extremely illuminating and exactly what I needed.

Centering prayer is exactly what you say it is - centered on US. It comes up when I do my lectures on New Age influences in the Church.

I think I'll do a series on New Age in the Church when I finally wind up the 12 Steps.....

Adrienne, good idea. There's so much New Age stuff around, and some of it masquerading as "Catholic."

I don't know if you've run across it, but Fr. Mitch Pacwa (he's a *good* Jezzie) had a book out about the "New Age" stuff some years back. AFAIK it's still in print, but shouldn't be too hard to find a copy. I've also seen the enneagram pitched in far to many places.

Oh - it's sitting on my shelf. I devoted many years to studying this crap. While I was away from the church we attended Unity. That didn't last long but it made it very easy for me to see it creeping into the church. Now it no longer creeps - it's a full gallop.

We have so many ladies at our church that are into the likes of Joyce Meyer and the rest of the Word/Faith crack pots. And please don't get me started on The Secret or Oprah's new favorite Eckhart Tolle. Ugh!!!!

How is "centring prayer" related to the three methods of prayer of St Ignatius Loyola's Spiritual Exercises? Perhaps particularly the third method?

The point of course being that, as described in the Spiritual Exercises, these methods of prayer retain a strong connection to traditional, Catholic prayers, Scriptural or doctrinal formulations.

I make this observation without great experience or knowledge of "centring prayer" but suspecting that the psychological insights of the the Spiritual Exercises might have something to offer by way of purification ...

I have too much centering prayer in my life, centered around my self, and I find myself in the confessional because of it ;}

Totally agree, Karen *holding up lit cigarette lighter* I spent too much time in the charismatic realm to be comfortable with things that run tangentially or are opposed to tradition.

Joe - Christian meditation is centered on God. Centering prayer is based on Eastern philosophies and requires going inward to seek your answers.

Centering prayer as it is taught by the "New Age Catholics" (lots and lots of sisters!) is oppossed to the way of Catholic prayer (so says the Holy See)

Do you want to encourage praying the Liturgy of the Hours?
I’ve just created a badge for blogs and websites.
Please have a look here:
http://www.liturgy.co.nz/ofthehours/badge.html
Let me know if there are any issues with this – size, etc.
Blessings

I am glad you spoke out about centering prayer/praying with the ocean. I feel the same.
I looked at your profile and was concerned on your favorite music style i.e. beatles, classic rock .. . kindly look this up, it is music from the devil. I use to listen to this years ago until I understood where its origin came from.

Jean, it's only music from the devil if you play it backwords.