The following was forwarded to me, and I thought I'd post it here:

PO2 (EOD2) Mike Monsoor, a Navy EOD Technician, was awarded the Congressional Medal of Honor posthumously for jumping on a grenade in Iraq , giving his life to save his fellow SEALs.

During Mike Monsoor's funeral in San Diego , as his coffin was being moved from the hearse to the grave site at Ft. Rosecrans National Cemetery , SEALs were lined up on both sides of the pallbearers route forming a column of twos, with the coffin moving up the center. As Mike's coffin passed , each SEAL, having removed his gold Trident from his uniform, slapped it down embedding the Trident in the wooden coffin. 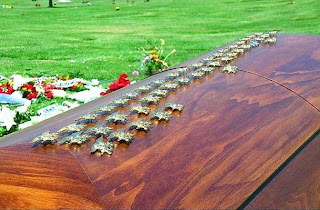 The slaps were audible from across the cemetery; by the time the coffin arrived grave side, it looked as though it had a gold inlay from all the Tridents pinned to it. This was a fitting send-off for a warrior hero.

This should be front-page news instead of the crap we see every day.

Since the media won't make this news, I choose to make it news by forwarding it onto you guys. I am proud of our military and the men and women who serve in it. They represent the highest and finest values of this country." 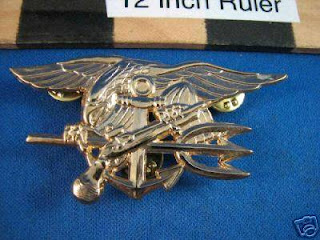 To read more about him look here.

Fox news, to its credit, did belatedly report this tribute of fellow Seals on July 4, 2008.
Posted by gemoftheocean at 6:05 PM

May God have mercy on him for laying down his life for his friends. Quite a soldier and hero.