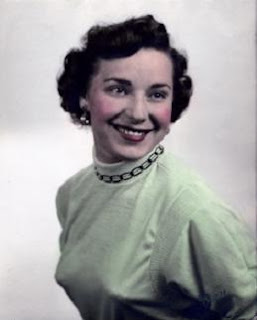 ...we're in them and I hate it. I love spring when we start to get longer and longer hours of sunlight, and then we still can revel all through July ... but there's no denying that in August, the days have already started to cut back on sunshine, and the weather gets downright sultry and I don't want to do zip much of anything.

Early August also coincides with dredging up memories of my mom's last birthday and her death and burial. A sad time all around for me, but I'm glad at least she didn't die around the holidays, particularly Easter. It would have been almost unbearable.

I can remember the last birthday gifts I gave her. One of which was a movie called "Come to the Stable" which she'd described to me earlier that year, and I saw at the video store not long before her death. It's more of a Christmassy story...nuns wanting to buy a non-Catholic's land so they could build a hospital. So there we were, the weekend before my mom died, watching this Christmas movie in the hottest part of the year...I could hear a death rattle in her throat, or the precursor of it, and tried to deny it to myself, but on reflection I think I knew. I'd not gone to Mass that Sunday, afraid to leave her for a few hours. But what pleasure for her to see that movie which she'd not seen in roughly 40 years. So 13 years ago today, at exactly this time we were watching that movie.

The photo above is one of my mother when she was in her early 20s. It was her "girl next door" look. Unlike me, she could parallel park. (Well, not more than a 3 point turn at most.) We did, once, when I was about 10 take the '66 turquoise Thunderbird (then brand new) out for, not a "spin" but a fly. We were living in Roanoke, Va. and she'd come to pick me up from school. There were two ways to get down the hill from St. Andrew's Parish towards our home. One road was pretty good, but a little further from the church, the other was rather steep. It went down a San Francisco like incline, flattened out to a rather short straightaway, then down another steep grade. You really had to ride the brakes going down. Well, 90% of the time we took the less steep route. However, one fine afternoon we'd taken the steeper route. Mom sorta "forgot" and took the hill like she did the other one. Yes, she realized late and we simply FLEW off that short straightaway. All four wheels off the ground. We predated Thelma and Louise by a number of years. We decided this little story was something dad best not know about. Not right then, anyway. God, how we laughed all the way home and forever after.
Posted by gemoftheocean at 5:54 AM

what a great memories to cherish.

Lots of love and prayers for both you and your mother.

It's midsummer that drives me up the wall, for just about the same reason - my dad died on June 25th, his birthday was July 3rd, and his funeral was July 5th. Really not my favourite time of year, even though I've come to terms with his death.

Stephen I hope you have some peace. It was awful when that happened for you and your family so out of the blue like that. I at least had considerable time to prepare myself, you and yours hadn't. I'm at least grateful the melancholia doesn't come on in the holiday season. That would be infinitely worse for me. My dad also died in summer on Sept. 8 (2001). Just before the 9/11 attack. It was a good 3 weeks to a month after his death before I could grieve properly....but with him it was much more complicated than with my mom. Mom I more or less understood. Dad was a lot trickier.

Prayers for you all at this time. But it was great to read the story about the T-Bird. In high school, a friend had a '66. Later I bought a '69. Still miss that car. Once I was going through an abandoned parkin lot at about 30-40 mph. I didn't realize the last third of the lot had a 4' drop. I was airborne. Hit hard and tore two motor mounts in half. Still was fun though.

rjw: YIKES!!! I had that car until a few years ago. I needed the dough and it really needed someone who knew how to baby it.

I am stunned now that I used to get to drive it sometimes to high school when my mom didn't need the car that day. It was a convertible too. IT was gorgeous.

Prayers ascend for you and your mom. She sounds like the perfect mom - a blend of fun and friendship with lots of common sense.

thanks all - and Angela -- my mom even held the throw up bucket for me when I was little and cleaned up afterwards when I missed.

Nothing says "I love you" like cleaning up after someone's vomit not only without complaint but with a "can I read you a story or do something for you?" and a hug and a kiss on top of it.