64 Mass - the FIRST changes from Latin

Knew I had it, and I finally found it. My 1st Communion class was the first class to receive their Communion with the change over in place. As you will see, there was still an amount of Latin in the Mass, for the most common responses, but for the larger chunks the people had a part of, the change was to English. Liturgically, I consider my own generation (those born in the 50s) the "jacked around generation."

Elsewhere in the blogdom, notably here, here, and here, the new ICEL translations have been referenced. I thought my readers would like to see the little 4.5" x 3" card which was passed out to the people just after the April 64 approval for the new texts. I received this card shortly before my first Communion. You can click on the photos for larger text. 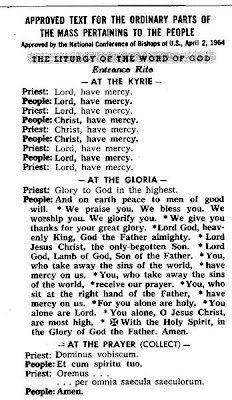 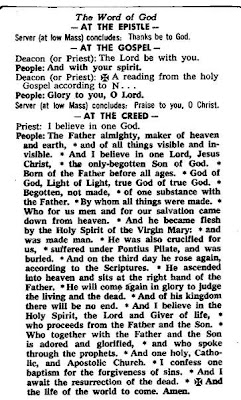 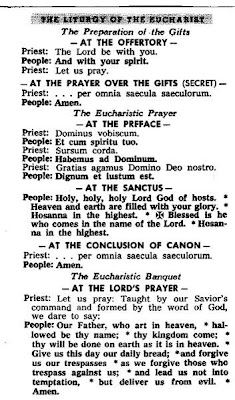 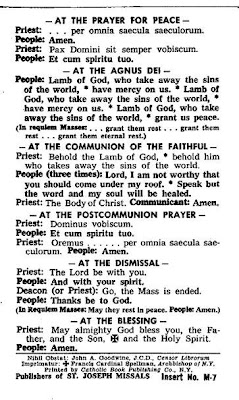 While I am personally glad of many of the changes, such as the priest facing the people, English responses, readings being in English - I didn't appreciate that for a while there they seemed to change the Mass every time you turned around, and I really hated niggling changes like "WE believe in one God." And as far as I'm concerned they can ditch the protestant "For thine is the kingdom" jazz. Yes, I know a monk got stoked and wrote it in a margin...so what? Ice that thing.

Slightly annoying is the fact now that we are getting still another translation, some of the things they got right on the FIRST pass are now jacked around once again. What was wrong with "Oh Lord I am not worthy, that you should come under my roof, speak but the word and my soul will be healed?" No. The ICEL boys have to "mark" their territory like a dog on a fire hydrant. Nice try guys, but you know the boys who did it the first time got it right.

I really do not like the versions of the Gloria and Our Father we are too often stuck with singing at Mass now, far too sappy for my taste. And though I don't mind so much the concept of a sign of peace, I really don't like it in practice so much during the winter time. There are always some dummies who will come to Mass rather than stay home when they are really sick who insist on glad handing everyone and bringing the whole herd down with what they've got. And I hate the fact that often times there are parishes / priests which ALWAYS seem to pick a different option than the confiteor.

My fantasy? It won't be a sin to pull a gun on a priest and INSIST they say all the prayers distinctly enough to be heard....and "do the red" I want to hear the confiteor, all of the offertory, (God knows some of them mumble it), ALL of the Eucharistic prayer, and since I'm holding the gun ... Eucharistic prayer number I please. Oh, and I will have a friend train another gun on the cantor and organist...first sappy Gloria or Our Father, and they buy the farm. If the priest gets out of line I will give him the courtesy of a warning shot, then make him "dance" on a 2nd offense. On the 3rd one ... well, you know what they say.... "The third time is the charm."
Posted by gemoftheocean at 6:10 PM

Hi, Gem.
I was very struck by how similar your 1964 translation is to the one that we're going to get in 18 months or so. Obviously, as you imply, they are simply trying to reinvent the wheel. Our 1964 version was full of thees and thous (though not consistently), and there were several attempts to translate 'et cum spiritu tuo': 'And with you'; 'And with you too'.
I'm not really with you on the everything-out-loud question. When I'm assisting at Mass (rather than celebrating) I like long periods of silent prayer and find them helpful, rather than turning the Mass into a sort of lecture.

I just want to make sure you're not sacrificing a goat up there re: the silence! ;-D [To paraphrase the Sainted Fr. S. .... His 80th will be this October.]

I was glad I was able to find that card. I don't know whether I'm so much one for having a sense of being what will be "historical" even at that age (who knows I may have one of the few extant!) or perhaps it means that I'm just a pack rat! I expect a little of both.)

There's a few things I blanch at in there like the word "dewfall" that someone else had mentioned and there was something else that sounded klutzy "consubstantial" arrgh, but overall I like a lot of the tweaks. I suppose it's asking too much to deep six that "For thine is the kingdom" stuff.

The new changes do not bother me, as long as they get it right this time! Like you, I'm glad of many changes--the readings being in English! Sheesh I want to "hear" the Word.

"as far as I'm concerned they can ditch the protestant "For thine is the kingdom" jazz." --Totally agree. And, the less physical, up close and personal "touching" of your neighbor the better. I'm a nurse--people pass alot of germs when they shake hands!

BTW, Tara, I did go to Fr. Sean Finnegan's LM on the Monday he left San Diego. Very moving. I DID bag the far right hand seat in the front pew, and as this particular church's front pew was close to the altar, I got to see enough. Now if we could just take up a collection for a megaphone. :-D [seriously, I followed him fine until the "Te igitur" ... the beginning of the canon.] It was wonderful to hear all those saints names again. Next to the actual words of consecration, that was always my favorite part of Mass. It really gave a connectedness [is that a word] with the whole church triumphant.

BTW, if you ever have a chance to go to an eastern rite Mass, by all means do so. It will be mostly in English (other than the odd hymn here or there] slightly frustrating for me sometimes, just because of the ad orientem, but the priest faces you a bit more for a lot of things. Go early and bag a seat where you'll be able to see the most. Usually the front row, close to the center, if there's a wonking big iconostasis. Some have virtual walls, some more "modernized" still there but designed so your sight lines are a better. They use lots of incense which I love.

Karen:
Going to an Eastern rite would be interesting--and I love, love, love incense.

Tara, incense is *the bomb* -- they use a lot of it. Not the place for asthmatics, but if you don't have that affliction, go for it.

If you're lucky the thurible has bells on it too.
They use more incense in two weeks than the average parish uses in a year.

The right to arms in the American Constitution has just taken on a whole new meaning for me. Thank you, Karen! ;-)

Philip, it sure keeps "the powers that be" on their toes!!!