On Monday, Sept. 22nd, as a late birthday present to myself, I toured the State Apartments and back yard. (Okay, the English would say "garden" but I didn't really see any flowers out there save a few that were growing by accident.)  This tour is only open during late summer months when the Queen is off in Scotland and not camping out over her office weekdays during the rest of the year.

On the way over there I passed by the entrances to the  Royal Mews, and the Queen's Picture Gallery, which can be seen almost year round.

Here is a picture I took of the entrance to the Mews.  Years ago my mom and I toured them.  The Picture Gallery is separate from the one you see in the State Apartments.  The coaches and carriage horses are kept in there, and also, you can see some of the saddles, etc. the queen used when she was a child. 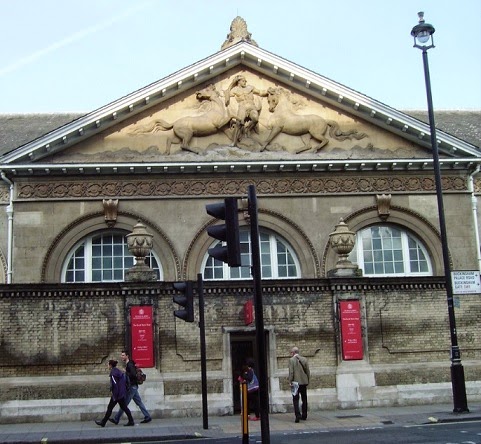 Almost directly across from the Mews entrance, is a shop which sells souvenirs of china and all manner of things, including these corgis.  Yes, you can shop on line. 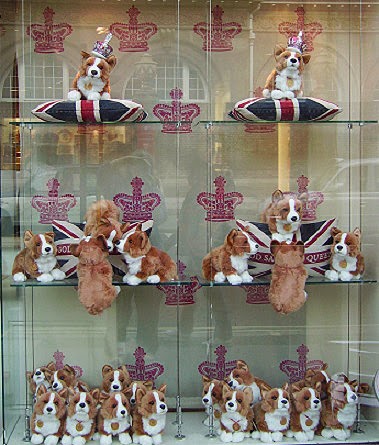 They won't let you take pictures inside Buckingham Palace, due to security reasons, however, you may see a few of the 19 state rooms on this page.  Included in the price of the ticket is an audio guide.  For just a few pounds extra, there is also a guide book which includes all the state rooms you see.  This year there was a special exhibit on "Royal Childhood."  It features toys, clothing, and other object (including a mini-Austin Martin, made for Prince Andrew) that the royal children wore or used.  Some of the items were from as far back as those used by Queen Victoria's children, and some were from the present day - including the sailor suit the then 4 year old Prince William wore on his uncle Andrew's wedding day.  There's a little movie shown of the Queen when she was a little girl, after the little "Wendy house" was installed at Windsor.  The royal great-grandchildren still use it to play in.  The special exhibit changes every year.

Once you go through the palace, you may go out into the "garden."   This is the back of Buckingham palace.

This is the back of Buckingham palace. The white "tents" are temporary to house a cafe.  At far left just below the trees you can make out the glass roof of the palace swimming pool.  The curved room center badk is the music room, and the room to our left of it is the fabulous white drawing room.  The Queen's more "private area" is on the far left side of the palace, i.e. the north side.  You can see the White drawing room if you look at the above link.

The cafe has a lot of nice desserts, sandwiches and other goodies.  Here's a look at one of the desserts. 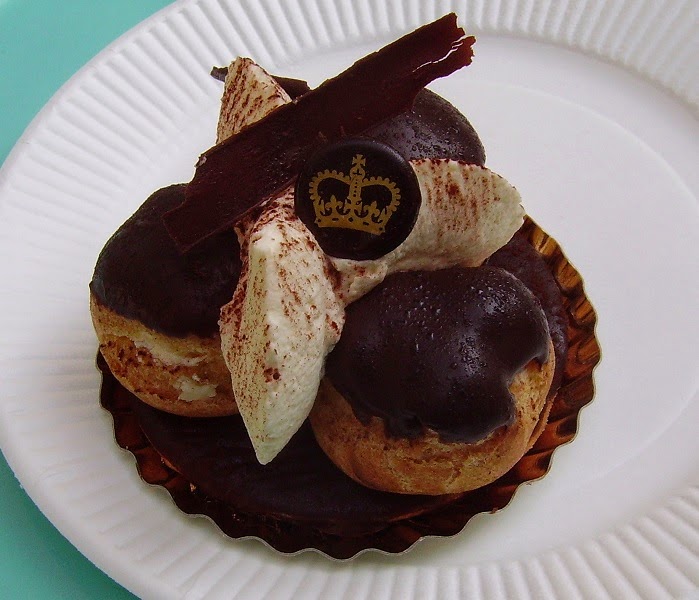 There's a nice walk way around the perimeter of the garden, and a huge pond. According to Marion Crawford, shortly after Queen Elizabeth's father became King and they moved into the palace, the then 10 year old Elizabeth got a little too close to the water's edge and fell in.  Quite a number of the trees are labeled with a small tag to tell you what sort of tree it is. 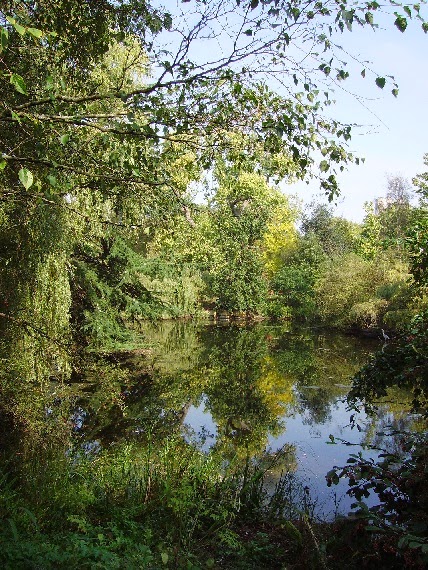 The Queen's garden is close to 40 acres.  Given there is a lot of nice well trimmed green grass plus the pond it's not surprising there are some animals who've found a home.  I spotted some geese... 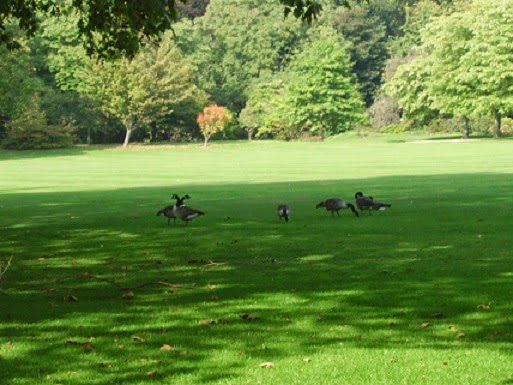 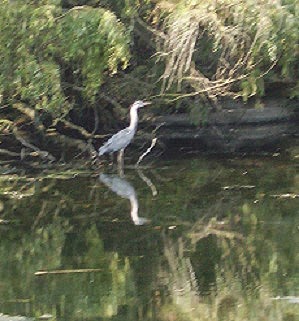 Here's another view of part of the pond.  In the upper right corner, you can see the swimming pool in full. 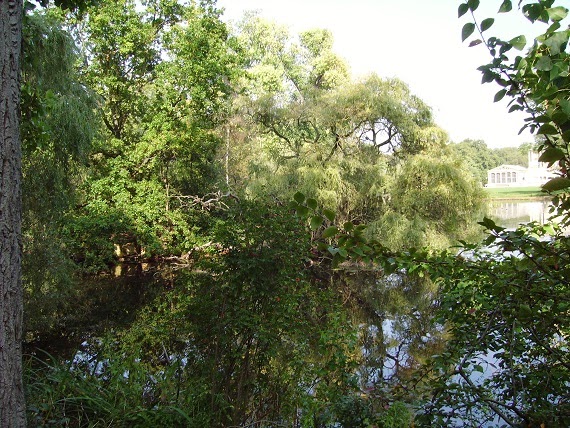 You don't get to walk around the whole garden, so I thought it might be useful to use google earth to show the grounds from above.  You can see a tennis court in the upper left hand corner.  Staff are allowed to book it.  If you search for 7 Buckingham Palace Road, London, you should be able to pull up the same results I did.  The little blue "dots" are markers for where people took pictures, so you should be able to click on them for other views.  I notice in this shot, the area immediately behind the palace seems to be denuded, so I assume they were going through re-seeding the lawn, which was golf course like plush when I visited.  The area to the  left of the denuded area is, I believe, marquees set up for garden parties.  So I expect this satellite view was taken just before or after garden party season was over but before the marquees were put up or taken down. 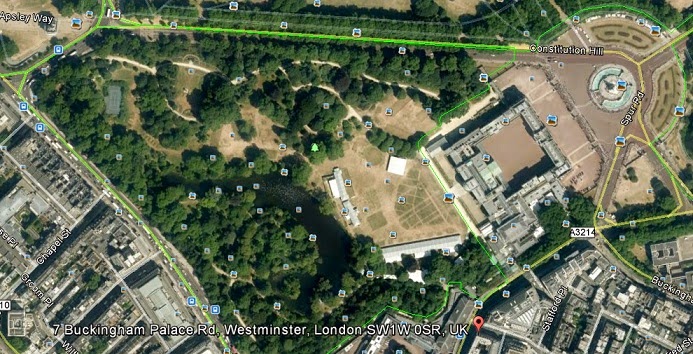 If you have bum knees or other "issues" don't worry. There are plenty of benches and other places to sit inside the palace, as well as outside.  When you book your ticket, let them know if you need disabled access, then can also provide a lightweight folding seat.  I took advantage of this, but only needed the folding chair a few times, when I wanted to camp someplace a little longer in one of the "smaller" rooms which didn't have as much seating.

I was able to use the lifts when needed.  My knees survived very well, and I came away unscathed in that respect.  If you use disabled access, you also get to use the inside restroom afterwards when you come down the lift at the end.  The thing was huge.   There are also "loos" once you get outside.

When you leave, you can have the back of the ticket stamped and you may return as often as you like without paying again.  Your pass is good for a year.  It's like that at other royal places too at Windsor Castle, for instance.  Separate charge for that, but again, the pass is good for a year if you get it stamped.  BUT anytime you wish, other than a few days of the year, you may go see Vespers in St. George's chapel at Windsor at no charge. Just line up at the bottom gate shortly before the service.  You should be able to easily get a seat in the choir during the winter months.
Posted by gemoftheocean at 8:45 AM