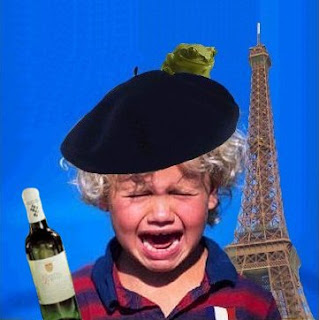 ...geez, La Weeze. Agincourt yet. 593 years ago. I don't think the French could overtake the Ladies Lounge at the Ritz without difficulty, if at all. Boo Hoo. Would you like Cheese with that Whine?

Sheesh, put some ice on that, Jacques!
Posted by gemoftheocean at 7:59 PM

Labels: give it up already

The great east window of Gloucester Cathedral (the size of two tennis courts) was installed in celebration of the English victory over the French at Crecy. 1346. The French translation of the guide book is especially blunt in telling the Francophones this fact! ;-)

ROTFL!!! I must look for photos of that... quite some time ago I came across the funny fictional book Prince Edward assisted writing re: the adventures of a New Zealand schoolboy. The boy was a very poor student - except he excelled at taking shots at the French in his history papers. Pretty much Ds and Fs in almost everything but a solid B+ in history.

BTW, OUR Phillies are up 2-1 in the best of 7 against Tampa bay, they have these next two games at home too. Last night at had a thrilling "shouting at the TV set" finish 5-4 win. Phillies led early, ****ed away the lead to a tie - then pulled it out by some really bizarre play, heads up baserunning, and some bonehead plays on the part of Tampa Bay. Heart attack time.

The window is grrreat!

I've some pictures of the window here, here and here.

BTW, it's about twelve months since those terrible fires in SoCal, isn't it?

Thanks for the links Phil. And YES, the for last part of Oct. the conditions SANS Santa Anas, have been PRime for fire. It's been quite hot, reaching into the low 80s some days, AND the humidity is down to 16% the other other day. Early Oct, we did have a good shower of rain for one day - which helps a little bit, but still every thing is bone dry and ripe for fire. So, yes, pray we get spared this year. When we first moved to Cal. it seemed like we'd get hit more in Sept. But for the last 15 years or so, late Oct. seems like when we've been hit. Besides last year, and just a few before that, which were awful, I can remember the 96 fires around here were bad too.

Oh, and there had been a fire up in Camp Pendleton last week, but they were able to contain and knock it down ofter a couple days. Thank God there were no Santa Anas (hot winds characteristic in Sept. and OCt. -- )

As one who grew up in the Old Confederacy, it strikes me as normal that the losers should remember a battle long after the victors have forgotten it.

My favorite Henry V was Kenneth Branaugh's, but even he removed this dialogue of the king from Shakespear's play:

But, hark! what new alarum is this same?
The French have reinforced their scatter'd men:
Then every soldier kill his prisoners:
Give the word through.

Such atrocities in war are to be expected, on both sides, even between Christians. It is the nature of the beast.

The historians have their work to do, but for most of us the play's poignancy of outcome will remain:

This note doth tell me of ten thousand French
That in the field lie slain: of princes, in this number,
And nobles bearing banners, there lie dead
One hundred twenty six: added to these,
Of knights, esquires, and gallant gentlemen,
Eight thousand and four hundred; of the which,
Five hundred were but yesterday dubb'd knights:

Where is the number of our English dead?
Edward the Duke of York, the Earl of Suffolk,
Sir Richard Ketly, Davy Gam, esquire:
None else of name; and of all other men
But five and twenty.

Long odds, even with longbows.

But I would give pride of place to Shakespear's Duke of Burgundy:

...let it not disgrace me,
If I demand, before this royal view,
What rub or what impediment there is,
Why that the naked, poor and mangled Peace,
Dear nurse of arts and joyful births,
Should not in this best garden of the world
Our fertile France, put up her lovely visage?
Alas, she hath from France too long been chased,
And all her husbandry doth lie on heaps,
Corrupting in its own fertility.
Her vine, the merry cheerer of the heart,
Unpruned dies; her hedges even-pleach'd,
Like prisoners wildly overgrown with hair,
Put forth disorder'd twigs; her fallow leas
The darnel, hemlock and rank fumitory
Doth root upon, while that the coulter rusts
That should deracinate such savagery;
The even mead, that erst brought sweetly forth
The freckled cowslip, burnet and green clover,
Wanting the scythe, all uncorrected, rank,
Conceives by idleness and nothing teems
But hateful docks, rough thistles, kecksies, burs,
Losing both beauty and utility.
And as our vineyards, fallows, meads and hedges,
Defective in their natures, grow to wildness,
Even so our houses and ourselves and children
Have lost, or do not learn for want of time,
The sciences that should become our country;
But grow like savages,--as soldiers will
That nothing do but meditate on blood,--
To swearing and stern looks, diffused attire
And every thing that seems unnatural.
Which to reduce into our former favour
You are assembled: and my speech entreats
That I may know the let, why gentle Peace
Should not expel these inconveniences
And bless us with her former qualities.

Rick, it figures you would like the French King's speeches more than Henry V's St. Crispin's day speech, for instance.

I am an anglophile rather than a francophile because when push comes to shove the English will fight for liberty from tyranny and the French for the most part will go tits up every time without much of a fight.

I admire the bombed out cities of WWII London more than the intact streets of Paris of the same era. A physically broken city can be rebuilt by people with character, but if character gives in to convenience to throw in the towel rather than securing ones freedom, then I think less of those people.
Not that there weren't both brave and cowardly in each nation - but I knew who was determined not to surrender and who wanted to get to the cafe by 5 for an apperitif.

I know it's kind of fun, but, really, there is the matter of history. French war dead far exceeded British war dead in both world wars. In the first the French lost a full 20 per cent of their young men of fighting age. In the opening days of the second world war the British were decisively defeated and barely escaped the Continent at Dunkirk. The French had no such option, and confronted 143 German divisions with only 65. Of course their military planning can be faulted, but I don’t see how their courage can be.