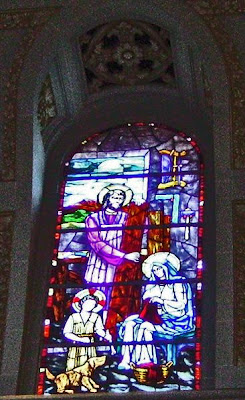 stained glass window is at The Immaculata in San Diego. I don't get to go see it very often, as normally if I attend a weekday Mass, it's in one of the adjacent parishes I live near. I love the domestic setting in which the Holy Family is depicted. The Immaculata was constructed in the last hurrah of when churches were made to look like churches and not multi-purpose meeting "spaces." My high school baccalaureate Mass was held in this church. It was also one of two venues where the relics of St. Therese came to visit a few years back on their world tour.

Usually dogs get short shrift in Jewish and Arabic culture. Which is why I like this particular window so much, being a dog fancier. The dog itself looks like a cross between two dogs we had when I was a teen and into my early adult years: an Irish setter (the shape of the dog) and a light brown "All-American. " Granted, more than a bit anachronistic on the "setter," but I love it all the more for that. And, of course, the boy Jesus is giving this well cared for dog a bone.

Too often the story the gentile woman in Matthew 15: 21-28 (also Mark 7: 24-30.) is a bit misread. People sometimes think that Jesus had to be cajoled into curing the woman's daughter. But Jesus really intended to help her all along. The apostles (bishops in training then!) had been trying to shoo the woman away, and wanted Jesus to send her away too. The story reminds them that it's not only the Jews he has come to save. He uses the incident as a teaching moment. When she says "even the dogs under the table eat the children's scraps" one has to wonder if Jesus didn't have a smile for her and was remembering what His own encounters with dogs were like.
Posted by gemoftheocean at 8:13 PM

Hey I saw your comment on ma beck's site about noblesville. I went to high school there for a year and a half before my dad got transferred to CA (thousand oaks). I agree about noblesville- yuck. but carmel is awesome! :)

Ha-ha---okay, so it's NOT "just me?" Whatever was the name of the Catholic church there? I blocked it out..it was round, and the people dressed, looked and acted sort of...well...don't take this the wrong way...but .... "protestant." If memory serves, even on Christmas they all looked liked they were going to someone's funeral. And you're right. The only place there I *COULD* stand WAS Carmel! It had the ice-rink and the only sign of life around there! [I'm talking Christmas 77.]
After a week there I REFUSED to drive, and had to be driven. I didn't mind negotiating the snow. These people would take icey corners like they were Mario Androetti. You'd see lying-on-its-side trucks littered all over the highway. duh. Even when it wasn't icey out, these were the people who CAME TO A DEAD STOP just before trying to merge onto a highway. Phooey on them!

I was a senior in college, and my dad had taken a job there that Dec. -- and I was there for a month or so on my term break -- thankfully, by the time I finished school that year, dad & mom decided "this place is NUTS" and dad hooked up a job in Portland, Oregon. (Which I also didn't live in, having stayed that summer of 78 in San Diego, finishing up up a few credits for my degree - then I went on the "grand tour" in August with my best friend from college and her older sister.) Sometime in late 79/80 my 'rents got back down to San Diego.

At least, when I checked out Portland, they weren't NUTS. City itself seemed very pretty and pleasant.

I don't think I've ever seen a dog in stained glass before. What a life to be Jesus' dog!

I lived in Portland for awhile, too. Nice town, but the state is very liberal, so hard to find a good church without a hunt. However, they do have Powell's Books there - a must see if you are ever in Portland.

SwissMiss: Yeah, all the tummy rubs, walkies, goodies, and brushy-brushies you want. I'm hoping he reconsiders on the "dog in heaven thing." Okay, so maybe they wouldn't get the "beatific vision" but couldn't they at least be able to see us?

I think there is *another* stained glass dog window around somewhere. It's not on "this computer" - but on the harddrive of one of my old dead ones Some little chapel (can't remember off hand whether it's a catholic one or not) had one.

Kinda funny about the window placement too. This church has a LOT of stained glass windows. a priest I know who taught on campus for years, wasn't even aware it was there. (though granted if he went to Mass on campus "back in the day" it was generally at founder's hall - a different animal.)

It sits in the "top of the shoulder" - if you will - of the left (as your looking down from the top) "arm" of the cross the church forms. i.e.

and so forth. If you're in the main body of the church, it's not easily seen, and usually you can't see it from your angle. It's also hidden by a baldachino [sp!] The window is placed high. Maybe sometime later today I'll post a 306 panarama of the inside of the church. It's actually quite pretty. A little "cold" due to all the marble, but I'll take it any day over that prefab. stuff "they" seem to "throw up" there. Although, I have to feel sorry for people in the 'burbs now, given the HUGE costs it would take today to build something like that. but I really feel sorry for those who have to SUFFER through absolutely miserable "goTaTownHallMeetin'" type buildings, if they have enough money NOT to.

okay, so "ascii line art" is OUT on blogs. Now I know!

Hi. Thanks for visiting my blog.
I live off Margerum so is that Allied Gardens or Del Cerro?

Our Parish is the Immaculata... for over 16 years.
I used to work in the Parish office and researched all of the windows.
The Dog has a NAME! It's BINGO

get it... a Catholic Church and bingo....
The Sacistran loves to tell that story... he is retired now. :( So I have to carry on the legend.
Hope to meet you sometime.
Laurie
ps Love the name of your Blog!