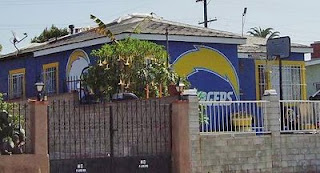 Haven't done many posts about San Diego lately, but the neighborhood I frequent for weekday Masses is, shall I say, one of the older ones. It's just on the east side of the 5 where the entrance to the Coronado bridge is. It's seen "Better days" but something about these older neighborhoods is somewhat refreshing[?] in that one sees the odd thing here and there that one wouldn't normally see in the more anti-septic neighborhoods.

I have to say the guy [I'm assuming it's a guy with a tolerant wife, or equal Charger fanatic] that he must have a set of big brass ones. You know all the guys are thinking "Wow, how did his wife/old lady/girl friend let him paint the house like that?" And the women are thinking "if my husband/old man/boy friend painted the house like that it would be a 9/11 call." This house is a couple of blocks down from the Church.

This next house is interesting. 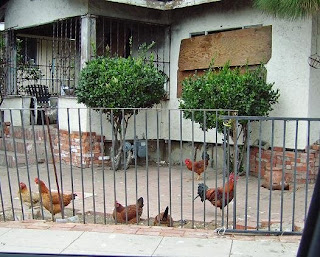 There were actually more roosters in the back, and wandering along the sidewalk, but something about it made me sense "cock fight gone awry" so I didn't get out and take the optimal shot 'cuz I was chicken. I'll mess with St. Paul, but not I'm not taking a chance just in case it's not Mamacita making a little money on the side keeping roosters to get their feathers to adorn hats- but Paco running a cock fighting ring. I didn't even know you could keep fowl in the city! [And something tells me "uh-uh" I bet no one is late for work, though. These guys are around the other side of the long block from the church, but I only saw them loose the one day after Mass. Some of them look like fine specimens!

Many of the houses were built in the 20s-40s I'd guess. I'd have loved to have seen the hood in its heyday.
Posted by gemoftheocean at 4:59 PM

Rest easy, if they were for cock-fighting they would be chained by their ankles so that they couldn't get at each other. These look bound for the stew pot.

I'm relieved then!!! I did see a few out and about this a.m. and yesterday, one was proudly strutting across the street!