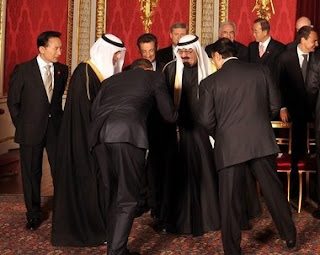 ...at least until this jackass does something dumber. But then, maybe he's giving the King profound thanks for paying for his "education." Or he's dropped his earpiece. His damn suit is shiny too. Where'd he come up with that glad rag? Mohammed's Discount Warehouse?

But then it's not surprising that a Muslim would bow like that. Totally in keeping with what this clown really is.

No wonder the Eurotwits had orgasms over him. Barry, why don't you just do us all a favor and take a page from Japanese warriors who screw up?

Oh, and in case you have liberal jackass coworkers who claim Barry Soetero "dropped something" here is a VIDEO taken from the side. This will NOT be endlessly played by the "kneepad" press operating in this country.

Posted by gemoftheocean at 10:16 PM

WOW. I'm in shock. I shouldn't be, but I am. And how much you wanna bet that Obamabots will still claim that he wasn't really bowing to him?

I have every confidence in the world that that's Exactly what will be said. It's telling, isn't it, that the video is not from an English speaking source, which means all the poodles in the liberal press have covered this over with cat litter. But a full litter box STILL SMELLS to high heaven. I suggest, btw, making a COPY of the video before it's suddenly "gone" from youtube. Stranger things have happened.

Exactly, I was thinking the same thing, that'd be a great campaign poster.