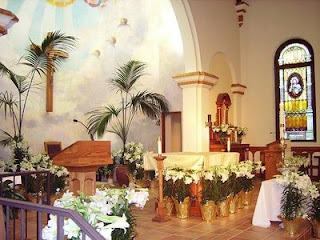 95% of the day was good. (Except for the flat tire bit, I'll finish dealing with that tomorrow.) The powers that be outdid themselves more than usual this year. I served the evening 5:15 Mass and helped with Communion. Honestly, it was like sitting/standing in a field of lilies from my vantage point. 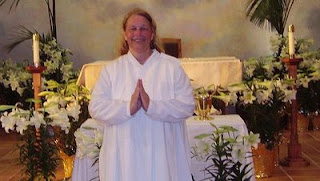 My church is in Old Town in San Diego, and is named after the patron saint of the United States. [And yes, I'm being slightly cryptic, I like to fly under the radar.] The pastor emeritus had the Mass, Fr. Tom P. -- Father Tom was also the first priest I ever served Mass for, back in '75 early in my college days. [And all you young girls serving Mass now can call me a pioneer woman for blazing the trail for you - and you can thank Fr. Tom as well. There WOULD have been a nice pic of Fr. Tom and me here BUT the person who took it must have jerked her hand just as she took it, oh, well.] 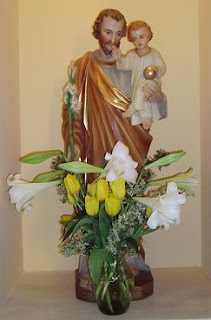 The side niches were also decorated nicely too. I hope everyone had as wonderful a Lenten Season and Easter Triduum as I had. Below is some video I took after everyone left. Might be a little dark but it was about 6:40 or so, and I just used all available light.

Posted by gemoftheocean at 5:56 AM

Hope you had a great Easter...my not so great Easter in Liturgical Hell is documented for all to see.

Gman and Joe, meant to say thanks!