Good Friday - (Mulier Fortis must have been asleep at the switch!) 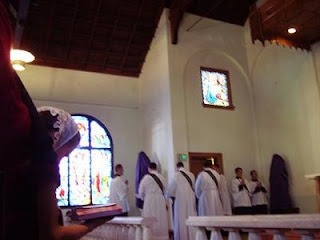 ...wow...I have some Good Friday pics up before Mulier Fortis, and she's 8 hours ahead of me!

These pictures were taken at this afternoon's 3 o'clock service at St. Anne's, San Diego. MY but I've been to theatrical performances with fewer costume changes! Sorry if these pics are slightly fuzzy. I used the best ones - I didn't want to use flash and have the entire congregation beat the snot out of me.

This first picture is of the gospel reading. It's been intriguing me why the gospel is read to the side like this. Even in the eastern Rite the Priest come out to the front of the sanctuary and proclaims it to the people straight on. Whatever. They all chanted very well. I always pity the poor soul who has to sing the high voice. I dunno what the Church was thinking. Ditto if "Jesus" doesn't happen to be a bass. I need to look at my Jungmann's to see if there's anything about this "gospel sideways" business.

This next part is where "The wood of the cross" is gradually unveiled. Newly ordained Deacon Jose Zapeda is to the left, Fr. Flood, visiting head honcho of the North American District of the FSSP is the principle celebrant with the cross, and Fr. Gismondi, the pastor of St. Anne's, acting as subdeacon, is to the right. Something tells me Fr. G. probably took off his stole a little too soon on this one. Because if memory serves he gave his lackey a funny look after he took it off and handed it to him, and then perhaps[?] realized "too late" he wouldn't have time to put it back on and get where he needed to be in time. I think he did it to see if anyone would notice. 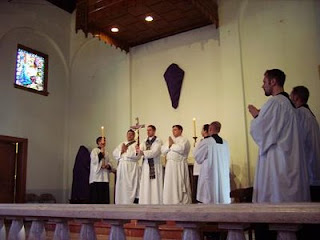 This next photo was taken just before Communion. Earlier on they'd had on Black vestments before the unveiling, then they switched to purple for Communion. 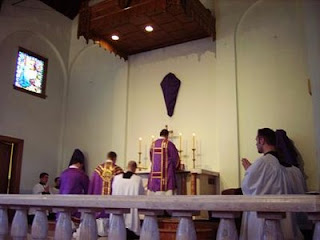 Then after Communion, exeunt, sacristy sinistra. 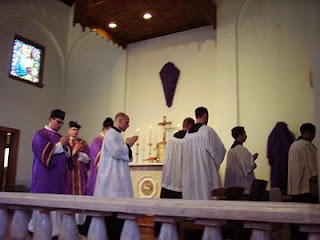 Have to say I'm always a bit taken aback that the biretta on/biretta off business is somewhat entertaining, given that on most entrances and exits it only stays on for a few paces. It's a cool hat though, so I can see why someone entitled would for sure want to wear one. I expect it's from the days when the sacristy was a ways away from the sanctuary, and there might be an outdoor hike involved - and given the cold in Europe where this stuff started, I can see where one would want to have a hat on. These birettas, I've read, were derived from a midaeval academic cap.

A prayerful time was had by all. It took about one hour and fifty minutes, but the time just flew by. No need for Henry, the Horse, to dance the waltz.
Posted by gemoftheocean at 2:45 AM

"... the biretta on/biretta off business is somewhat entertaining ..."

A gentleman always wears a hat!

He could at least tip it! ;-D
Happy Easter, you and your dear father remain in my prayers.

Heheheh... not asleep, just on retreat! I didn't realise that my photos were that quick off the mark... friends keep demanding to know when I'll get the photos on the blog because I'm too slow for their liking...

Gospel proclaimed to the north - from whence the Barbarians came. YOu have to put the liturgy in its European context! Great post.

Fr John has said just what I was going to say. Some say great minds think alike. Others say that fools seldom differ.

Ha- see you two Fathers came out of the coma. Yes, indeedy, I did look it up in the Jungmann's and that's what they did say, the gospel is proclaimed "north" against the barbarians. [and also, I might add the women used to sit on that side of the church too -- ... ever since Adam claimed "Eve made me do it" you guys have had it in for us. and if memory serves, in the wedding ceremonies, the groom goes on the right. jungmann's also went on to say something about proclaiming the gospel "against"/i.e. looking at the women, became untenable, so that's why the priest reads it from the altar, facing just slightly left. Who'd have guessed sister Mary Brunhilda would have been that much of a distraction! [Perhaps there was a congregation of nuns who looked particularly fetching in their wimples, who knows?] Maybe the Eastern Rite priests face the congregation at this point because historically they were allowed to marry and if such a priest were married, if he gave someone "the eye" his wife would have taken care of that nonsense by killing him!

Of course the fun thing about doing the gospel this way in this particular church means that the priest, deacon and subdeacon happen to be facing south!

ah, where north is south and east is west, welcome to the "new church." I may do this particular comment as a separate post later.