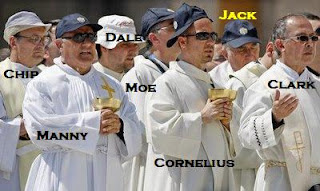 That salt-of-
the-
earth-
priest, Fr. Blake, in Brighton, UK at St. Mary Magdalen has taken some exception to the baseball caps worn by a coterie of priests at some Mass or other. Despite the tongue in cheek ribbing I've been giving him, I would agree that in general this sort of thing shouldn't be done.

HOWEVER, though I'd look daggers at any priest who did this at an indoor Mass, I have to cut a slight bit of slack to priests who throw in the towel and resort to a hat, even a baseball hat, in lieu of keeling over in the heat.

A while back Fr. Martin Fox had written about attending one of the outdoor Masses with the pope, and he related how long they were on the field ... quite a few hours before the Mass ... and then the Mass itself.

I can just imagine how the conversation went:

Fr. Cornelius: Dudes, I have HAD IT, sweat is now rolling off my head down into my jockey shorts. I don't care, I *AM* going to buy a ball cap from the vendor and wear it.

Fr. Cornelius: Shut your piehole, Clark ... you were always a goody two shoes, even in seminary.

Frs. Manny, Moe, and Jack: Clark, shut up -- he IS right....we're getting caps too, you can join us or be a putz....the bishops can't reassign us *all* out to St. Nowheresville.

Frs. Chip and Dale: Where do you think we just came from?

Fr. Jack: Well, at least get the same caps we have.

Frs. Chip and Dale: Can't - we just spent our last bucks on beer.

Frs. Manny, Moe, Jack, and Cornelius: You guys are drinking that swill? G'wan. Get some. We'll send the bill to the bishop and we'll sign it with Clark's name.

Fr. Cornelius: I'm shaking. Yeah, it will probably go on our permanent records too.
Posted by gemoftheocean at 6:03 AM

I think that Cornelius needs someone to charitably correct him on how to wear a baseball cap. At least get the thing on yer head!