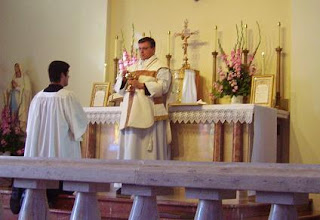 Today is an anni-
versary for me. It's not a pleasant one to remember. It was one year ago today that I was told by my former pastor not to "chase after" and "embarrass" people who walk away from Holy Communion without consuming the Host. I quit on the spot. Usually you don't quit after 37 years all in a shock to the system like that. But I had to do it. Needless to say, the diocesan non-response of just shining it on without an apology is despicable to me. I never thought much of our bishop to begin with, but his non-response/handling is about as bad as the original offense as it condones what the pastor did.

Thankfully, I had already been going to St. Anne's parish in San Diego for frequent daily Mass, it having been close to my work. If not for Fr. Sean Finnegan's visit in the summer of 2008, I'd have been unaware of that new parish being given over to the TLM.

I still go to see the Sainted Fr. S. at his home to assist at his Sunday Mass. [He is not able to drive any longer, due to an eye problem.] But I also frequently make a morning Sunday Mass at St. Anne's, as well as get there for daily Mass when I can.

The TLM still has a few drawbacks for me. I'm no "silent" canon fan. But at least I know that the priest is going to say and do exactly what the Mass calls for. The priest isn't going to ad lib. And for sure he'd like as not personally put someone in a headlock who tried to waltz away with Holy Communion without consuming it. That's probably what I like best about the Latin Mass. Fr. Gismondi [aka "The Amazing Fr. G." on this blog] would follow through on St Tarcisius's example. Sadly, today, some priests would consider him a "meanspirited" naive rube.

Today Fr. Gismondi had a votive Mass for Vocations. Most appropriate. We need more good priests. And also prayers for priests who seem to have lost their way.
Posted by gemoftheocean at 9:24 PM

If it is any consolation: I once saw a priest in the cathedral in Liverpool chase after a man who had started walking away with the host in his hand. In another parish, where communion is normally given in the hand, I saw a priest insist on putting the host in the mouth of a man who had held out gloved hands. It seems to me that you acted with the same very proper concern as those two priests.

And I also saw to it that the idiot woman I followed also consumed the host. Hell could freeze over and I wouldn't follow a directive like I recieved.

Doing the right thing can hurt. I still vividly remember you blogging on what had happened and was shocked that the priest cared more about how it might look than the Sacredness of the Blessed Sacrament.
At least you didn't deny Him. :)

I'm stunned by the lack of respect for the Eucharist sometimes. I was a Eucharistic minister once. I handed the beautiful silver chalice to a woman, saying "the Blood of Christ", and her CAR KEYS clanked against the chalice!

Good for you. I too would have much to say of someone not consuming the host. Do you know that some pocket the host to use in satanic rituals? On YouTube, 2 young men did a routine where they stepped, stomped and smashed a host. It was appalling! Dear Fr. Frank at our hospital chapel will actually stop giving out communion and question someone who may still have the Eucharist in his/her hand. Bravo! And shame on anyone priest or otherwise who forgets that Christ is Present In The Eucharist. I'm glad you found a new "home" church. The Holy Spirit leads us to where we are supposed to be. God Bless.
crookedhalocatholicblog.blogspot.com
cucinananette.blogspot.com

This is a very sad event to have happened to you. I just never realised stuff like this went on at Mass, until I joined blogger.

i love to read your feeling. you acted with the same very proper concern as those two priests.