The Optimism of the Amazing Fr. G 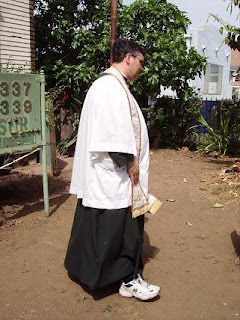 Busy, busy day. This morning I attended St. Anne's morning holy hour, benediction and Mass. Afterwards, starting at 10 many people (I'd guess at least a good 35+) showed up to do a general cleanup of nearby badly needed property the church recently acquired. It's the sort of project that would give an older priest pause to undertake.

Wish I had more snaps but I'd quite forgotten I'd taken the memory card out of the camera [duh] and by the time I'd remembered the batteries were about dead anyway. I did manage to get this side shot of Father G, the pastor, shortly before he blessed (and for all I know, exorcized) the house. God bless Fr. G. for wearing that cassock all day, but I bet his dry cleaner will want to wring his neck. He and the deacon did manage to acquire more than a little dust on them.

Boy was there a lot of junk to be moved. A whole dumpster was filled, and there's still much more to be done. But the carpeting [AY!!!! CARRUMBA was about the best that could be said] and much of the lino and odd furnishings (including toilets that Thomas Crapper probably made himself) to say nothing of all the junk outside were hauled to the dumpster. Amongst other things, I myself managed to purge few vids from a high shelf in the house. I turned to the person next to me and said "ah-ha---this must be the former owner's porn stash" and judging by one of the titles I guessed right. For those who *must* know it was entitled [Fr. Erik, cover your eyes] "Big [euphemism for mammary glands] Club." I had gloves on at the time, and made sure it went on the BOTTOM of the trash can with some more junk on top.

About a half hour after Father went through the house and blessed every room, I was loading some items on to a pick up truck and I noticed that two nice clean cut men in dark trousers and white shirts and dark ties were speaking to a young man in our party who pointed them into the house and said something along the lines of "find the man all in black and talk to him." I laughed as they entered and said to the guy (who'd had a Chesshire cat smile) "You didn't just do what I think you did, did you?" He laughed and said "yeah, maybe Father will convert them." I restrained the impulse to follow - because I really would have liked to have been the fly on the wall on that one. About 7 minutes later, they came out, tails tucked between legs. Then later when Father came out I said "Well, did you convert them?" And he said "They're comin' back!" And it wouldn't surprise me if they DID eventually convert!!! They have no idea they'd just walked into the house intended, eventually, for catechetical instruction. 1st customers, so to speak! They just don't know it yet.
Fr. G, ever the optimist, eagerly searched for that 1909 VDB penny when I gave him a hand full of pennies I'd found in a dresser drawer. ["Here's 12 more cents off the mortgage!"] Ah, well...judging by the junk that was cleaned out today, it would surprise me none, if the former owner was the sort of guy who had stuffed money in the mattress. Wait. Somebody DID check those old mattresses, right?
After the lunch break another woman and I were detailed to go "power wash" the concrete between the church and some existing classrooms. We were about a 1/3 of the way through when the machine blew a gasket, or whatever it did when it quit and started smoking, so we hosed and broomed it the old fashioned way. By then my sneakers were so wet I knew if I went back to the house, I'd be coming back with mud pits. The deacon assured me the dumpster was about full and I shouldn't feel guilty for knocking off work.
So I went down to the Kroc center for the most relaxing swim I've had since January! I *almost* felt guilty.
[And Fr. Sean, if you read this, Roberto from the Little Oratory says "Hey Fr. Dude" or "Ciao" or whatever it is Italians say to Irish priests with English accents and Her Majesty's passport. I had a nice chat with him at lunch. He'd looked at me and realized I was a blogger who knew you. "You're GOTO!" he whispered and I smiled and gave him the sssshhhh! sign. I don't go out of my way to draw attention to the blog. Whomever finds it, finds it!]
Posted by gemoftheocean at 6:11 AM

Hello Gem of the Ocean! It was nice to chat with you during lunch! :-)

:-D Glad you found it. Hope to make it up to vespers tonight!