...too bad most of you missed it! Through the auspices of a good friend of mine I was able to score a couple of passes to Sea World yesterday. (If you're goofing off at work, you may want to mute sound before clicking the Sea World link.) Fr. Sean of Valle Adurni has been visiting San Diego this last week and between jumping through a few hoops for the Latin Mass people out here he's had some time to do some "normal tourist" things. See his blog for details regards his take on baseball, booze, free refills, La Jolla, all the different trees we have out here, etc. 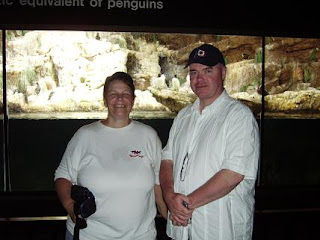 (Actually, my hair is kinda long right now, which is why it's tied back. A few penguins in the background to go along with the emperor and empress penguins in the foreground.)
Yesterday was a nice day to go, the weather being slightly hazy. We still got perhaps a little more sun than we thought we would - him more so than me - I had a base tan, he didn't have much of one. I was a bit amused that father was initially going to go in his clericals and after the preliminary how-dee-dos I jumped on his host (we'd spoken briefly over the phone before) and I said something along the lines of "DUDE, did you tell him about the possibility of getting wet and how hot it is there?" And Fr. Sean said "you mean I shouldn't wear my clericals?" To which I said "you will be hotter than Hades in that." So he quickly changed into mufti. And off we went. We parked near a "guard tower" which I'm sure Fr. Sean will upload. He was a little stunned by the fingerprint reader at the gate, and so was I, Having checked my camera bag for "dangerous items" I still managed to waltz in with my mini Swiss Army knife. Whatever, I think I could have had a bazooka down my pant leg and they'd have been none-the-wiser. I *think* the fingerprint scanner was for people with annual passes so they don't "lend" the pass to friends...but who knows? We weren't asked to use it at any rate.

Shortly after entering, I stopped to pet a batray. Ugly thing that looks like a B-1 bomber in miniature. It felt very smooth and slick. Much smoother and slicker than I'd have thought. Then we hot footed it over to Cirque du Mer ... for which I later bitched out my friend for recommending. "WTF were you thinking?" I asked her that evening. Waaayyyyy too "French." I kept praying for a killer whale to pop up and eat one of them. Didn't happen. Then we stopped for lunch and Fr. Sean treated me to chicken jumbalaya. My chicken was dry, his veggies were hard...the rice and jumbalaya was good by both accounts. But it was still fun because of the conversation. We topped it off with watermelon. And if you think we talked about you during lunch we probably did. ;-D

We also hit the sky tower which gave a nice panoramic view. 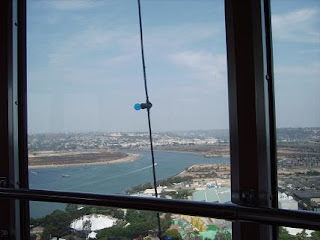 The manatee rescue was awesome...can't figure out why they weigh 1800 pounds, eat 300 pounds of lettuce a day and have hefty waistlines and small fins and they do constant 360 spins whilst swimming. Fr. Sean said it "just goes to prove diets don't work." We saw some gluttonous sea lions and Harbor seals. Fr. Sean couldn't tell the difference, but I could. But then I'm a local. 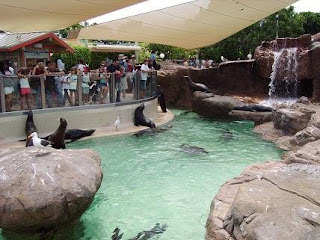 We did the shark encounter which was really eerie. 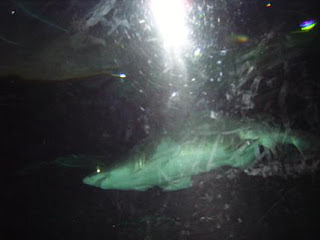 (Sharkus attacki: Good Lord, look at the eyes on that thing!)
And you could also walk through the tank with them swimming right by. Well, like they say in JAWS "the shark is an evolutionary marvel -- it swims, it eats, and it makes other sharks, and that's it." 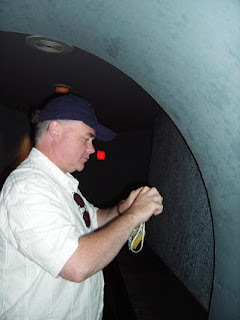 (Clergicus Anglicus Rubercus Probiscus: Good Lord, look at the red nose on that thing. Why don't sharks eat liturgists? Professional courtesy.)
He looks like he's concerned with getting that picture. I think he's concerned about the tank breaking. I was.

We caught a show with whales...and other thangs, had a really neat penguin encounter, saw some polar bears, Clydesdales, and pets which did some fun tricks, including a cat who walks on high wire. 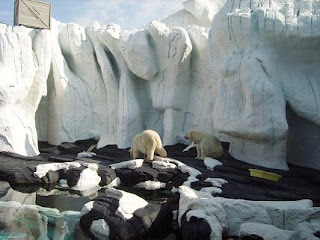 We also rode the Star Tours like ride that made you feel like you were in a helicopter going over the arctic. It had the obligatory "death star run" through glacial cracks. We also buzzed some polar bears. Hope Fr.'s back is okay, but he didn't bitch me out afterwards, and he didn't hobble back to the car. 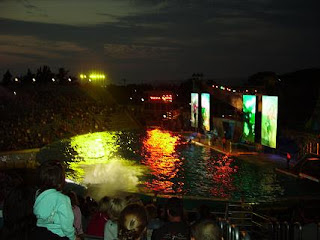 We had a whale of a good time, wish the rest of you could have been there too.

Update: Fr. Sean's take is here. And I was right. He did post the guard tower pic. If memory serves the funny bird is from Uganda and is a great crested crane.
Posted by gemoftheocean at 5:20 AM

Ah, i see that Fr. was trying to introduce 'Red Nose Day' to America!

Seriously (not really) Karen, are you going to buy me a new laptop if i spit any more of my tea on it because your sense of humour is so much to my liking?

Aw, if I had known, I might have come back a day earlier from NYC and high-tailed it down there with DigiDaughter, who adores Sea World.

I am planning to take my kids down to San Juan Cap today for the annual Moons Over Amtrak event - are you coming up for that?

Now then Karen! Slap on the wrist for getting that priest not looking like one!!lol

Jackie, he would have Melted, Melted I tell ya. And when they do that it's hard to get anything useful out of them!!! Now had he been able to come with me yesterday on the Harbor tour he could have worn the clerical threads - it was quite breezy and a little chilly, the weather being quite overcast mid afternoon.

I not only read Fr. Sean's take on Sea World, but put in my own $.02. Let's see if he posts it - go and check since I reference the moose, naturally.

The red nose is the best. You'll have to save it and post it again at Christmas, along with all the other reindeer :)

My dad, a Navy man, spent some time in San Diego in the 40s, after the carrier he was on, USS Princeton CVL-23, was sunk. Then he was up in Bremerton, WA, which was close to where we lived when we were out in WA. The USS Abraham Lincoln is home ported in Everett, WA, which is where we lived. Lots of the same things there, with the sea lions and such. Miss it. However, no Sea World...I've been to the one in San Diego, but nothing close to it in WA. Looks like you had a great time.