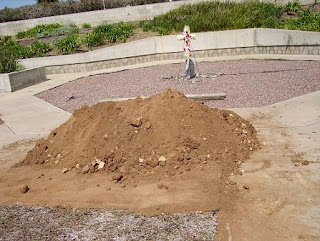 How often I've seen those phrases in literature. Usually, when people say that, they don't mean they themselves took part physically in doing the burying. I've attended many funerals, many of close family - and usually, at most now, family members and friends may be given flowers to throw onto the coffin.

Early this afternoon, after a beautiful Mass, Abbot Claude was interred on the grounds of the Abbey. In Paradiso was sung, as the monks took his coffin outside of church to the burial ground. Abbot Charles presided at graveside. I have never attended a priest's funeral before, but in this case towards the end of the commendation, Abbot Charles himself picked up a shovel full of dirt and threw it on the coffin himself.

Just that sound of the dirt hitting the coffin brought a few tears to my eyes, where before there had been none. All the monks blessed the coffin with holy water, and later all present were afforded the opportunity of throwing a shovel full of earth on to the coffin and bless the grave with holy water. It was truly a community effort of burial. It was moving to be given the opportunity of doing a final personal service for Abbot Claude.

And Almighty God will raise him up on the last day.
.
Posted by gemoftheocean at 5:44 AM

God bless him and all those who will miss him.

I am not against cremation per se, but I do think a burial has more dignity inherent within the ritual.
I have attended a few crems and there has always been something not-quite-right. At a burial the coffin is received into God's good earth, covered in soil which brings forth new life and a hope of the resurrection.
At a cremation-well the coffin is whisked away. My friend wa actually taken down in a kind of hole! It was frankly disturbing.

I'm with you. I can't stand the idea of being cremated.

It's a custom here for mourners to throw some soil onto the coffin after it has been lowered. I suppose the usual thing in the US is for the coffin to be left over the grave and lowered when the mourners have gone? I rather prefer seeing it go down. At a funeral I did for some Caribbeans once they wouldn't leave until they saw the coffin covered. We need to experience this finality to fully understand death.

If a burial, it's usually a custom to see the coffin lowered, and then (in about the last 20-25? years - usually flowers are given to throw down in the grave - I think to "soften" the effect of the "finality" of it all. That's how my parent's funerals were done.

When I was a youngster (I can remember the internment of my grandfather when I was 5) people were given a handful of dirt to throw on the coffin.

It wasn't only the sound of the dirt hitting the coffin, but particularly Abbot Charles doing this "service" for his friend. That's where I lost it for a minute, and I don't cry easily. With my dad, it was the 21 gun salute that got me. (Dad was a vet, and oh, how he would have liked that.)

In Hawaii, there is the custom of "aloha attire" - my parents and I all liked the theory of doing this - I have to say for my mother's burial, I had them dress her in a bright color, and wore a floral print light colored dress to the funeral - as I know my mom would have liked that. The idea being that you should be happy for the person who (if they lead a good holy life) is in heaven or will be.

I've never understood people who were depressed by the thought of purgatory. To me, that's GOOD news! If I died and found myself in purgatory, I wouldn't be sad at all - I'd think "yippee, I just have to clean up in this 'vestibule' - then I'll be in heaven."

The last funeral I attended the coffin was left above ground and everyone walked away--it seemed so odd--like it needed to be lowered. If it was my loved one--I would like to see it lowered and throwing a shovel of dirt--would make it feel like you were more connected--an act of love--you cared about them.