Why it's Called a "Hail Mary Pass" 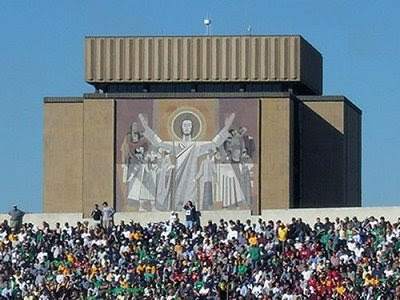 (snaps to Paul for inspiration, for the comment he made on my "Why no male virgins" blog post.)

re: God answering a prayer concerning football and a quarterback throwing up a desparate long bomb:

Left to His own devices, God was just going to say "Oh, HELL, no, let the chips fall where they may. You're not sucking me into this thing."

So that's why it's a "Hail Mary Pass" rather than an "Our Father Pass."

One can imagine the following conversation:

Mary: "Hey, the Steeler's quarterback would like a completion, DO something, Sonny!"

God: "oh, all right, Mom, just as a thank you for not letting "dad" whale the tar out of me over that 'missing in Jerusalem' business."

Mary: Darn skippy, you owe me on that one BIG TIME, Mister. Besides, I got money on the Steelers this week.

Mary: Pin money. Doesn't count. If you didn't like gambling, you should let Father O'Shaunessey run the bingo!

God: Got me there.

Mary: Holy YOU! I can't BELIEVE that guy called a Statue of Liberty play! Didja see that!

God: Yeah, that's why I made sure he got sacked!


You see it's a case of "God bending His will to a woman." [There was a point during Lent where somewhere it said something about "God not bending his will to man." In the EF form "vir" was used so that left an opening for the ladies! ;-D ]
Posted by gemoftheocean at 8:50 PM

Heh. Heh heh heh....binding His will to a woman. How did I finally get my hubby to agree to apply for a decree of nullity> I said "don't do it for me, do it for your mother." Worked like a charm!

Point 1: The are so many Catholic lawyers because we LOVE looking for the loopholes.

Point 2: Why we pray to Mary. What Good Jewish Boy says No! to His Mother? (cf. wine shortage at Cana Wedding...)

The orans postition is that of a woman praying with outstretched arms, and was found etched in the catacombs of ancient times. Maybe that's why it's called a Hail Mary pass.

Para: :-D didn't know about the carving. I do know it was an ancient prayer position. (I guess that semi-lets-off the hippies at Mass who hold their hands in that position. But I'm still not forgiving them for trying to get everyone to hold hands!]

If memory serves there was some broadcaster who came up with the phrase in the 70s - but I could be mistaken on that.

The hippies who hold their hands up at Mass don't have a clue that the orans postition was originally found etched in the catacombs. They just want to imitate the priest. There are some postures that are reserved to the priest alone, and the Orans is one of them.