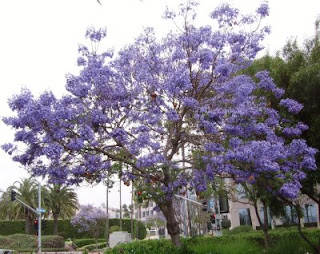 It's Jacaranda time. For about 46 weeks of the year, these trees look non-descript and unremarkable. But for about 6 weeks or so they are in all their glory. We're having a particularly particular "May gray" season this year - but these lovelies are a welcome vision. They start "turning" end of April, and are in full swing right now. Though some of them, depending where they are, blah, blah, are in that "half-state" with the green already coming back.
They were introduced to San Diego by Kate Sessions, a noted horticulturalist. Kate is considered the "mother" of Balboa Park. She brought well over 100 different kinds of species of trees to San Diego. The Jacaranda is the city's official "Ornamental tree." The city also has a park and elementary school named for her. She lived from 1857-1940. She was a San Francisco native, and one of the first women graduates from Berkeley. Her work will be appreciated by generations of San Diegans and visitors to come.
I didn't shrink the picture before I uploaded, so if you click on it you can see an enlargement.
Posted by gemoftheocean at 5:27 PM

I feel in love with these trees the first time I visited in May years ago. I tried to grow them here, but they don't like Utah winters.

The branches aren't tightly packed together, and it spreads very nicely. These trees never get overly large, and with just a little yard space, can be a real nice addition to a home. They are not water pigs.

We have jacaranda trees here in Australia.

They line the streets in many of the expensive Adelaide suburbs.

I remember a girl that we had as an exchange student said she loved the jacaranda tree so much that she would use if as a name for a girl if she ever had one. I don't know if she did or not but I thought at the time that it isn't a good thing to name your child after a tree.

:-D re: the naming the kid Jacaranda. If there was a St. Jacaranda, that might actually work! At least it's something that can be spelt without too much trouble. But then with idiot parents today, they'd spell it something like Jackcarrandah. or some such BS.

I love those trees. I might have something similar here in Houston/Tomball area, but not sure if it is exactly the same. I did a post on ours.

I'll try to look it up later today and send you the link.