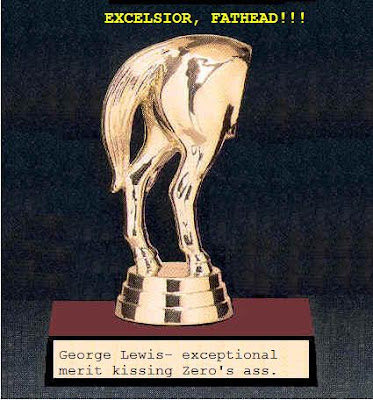 "He [George Lewis] said: "I think the idea of spending a year in Obama's America is probably more appealing to many students than doing so under the Bush regime He is perhaps the first intellectual American president we have had since Woodrow Wilson."

I don't know what this guy means by "we" [unless he is an American, and a stupid one at that] - perhaps "we Kool-Aide drinkers?" Him being so up on American studies, one need not supply the reference to Kool-Aide.
Posted by gemoftheocean at 8:15 PM

A well earned award.
What is in the water at these Unis that make the tutors so intellectual and so stupid all at the same time.

Please visit the Obama messiah video on my blog i think you will enjoy it.

Hi Smiley! Ran across a ref. to it on "Bones" -- will do so right after I finish downloading a vid.

Mum6: no kidding! With some of them the more degrees they have, the dumber they seem to be. No common sense. Zero, an "intellectual?" Please. My sides hurt.

If Obambi is an intellectual than I'm still a virgin. heh! I'd pit my dogs against that narcissistic wacko!