If it looks like a duck it's probably Hitler 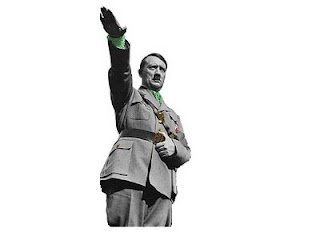 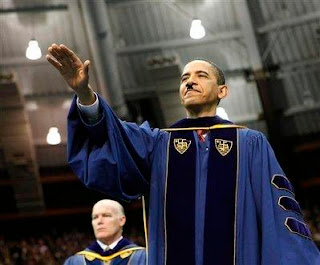 Posted by gemoftheocean at 8:52 PM

EF. He's been trying to shut down talk radio in a backdoor manner. IT's so frightening. He wants "diversity" panels on the FCC. Talk radio has largely been where conservative views have been freely expressed.

Creep liberals are still patting themselves on the back that "They're not racists because they elected a black man." I'm angry at them for not seeing he is a socialist, proabortion shill who sees himself as "the one." That and the fact that he won't produce a long form birth certificate. He's a usurper, and it doesn't bode well that he will be signing international treaties which would have the force of law. He's trying to shut down opposition. Even in the smallest thing, he's trying to control the media. The liberal media which, because they did NO WORK on checking out his bona fides are having to swallow hard and pretend that which is happening is not happening. The other day he closed off the pool reporters (a group of reporters which on a rotating basis cover the president's every public move) to something so simple as his meeting with the NCAA women's basketball winners - in order to have his White house corps put out it's own video of events. He can't handle being asked a question he hasn't heard before or doesn't expect. Can't even come before the press at a simple Gridiron meeting, which has been a Washington tradition since at least Grover Cleveland's time in the late 1800. Even Nixon could face his critics, Reagan, ALL OF THEM. But not the "beloved leader" someone may take a pot shot at him verbally. He can't have a teleprompter at that event. God Bless the United states of AmericA and keep her safe from harm, because this bozo "community organizer" hasn't got a clue. He now is getting away with dictating who the CEOs of various companies will be. A complete usurpation of his powers and the lamestream press doesn't question it. They are setting themselves up to be the kapos amongst us. I despise them as much as I despise him, but not as much as the contemptible idiots who voted for this jackass.

the owl of the remove said...