Around the Mulberry Bush with Mary 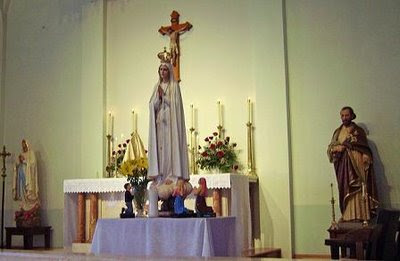 Sorta. I am beginning to appreciate that my own generation was not the only "jacked around one." I went down today to St. Anne's. Nice Holy Hour, Benediction, Mass, and Rosary and prayers for the 1st Saturday. Bits from 1920, bits from 1942, bits from '62, and a bit for the Feria of the day (St. Athanasius.)

The ordo on line wouldn't have helped, particularly. I think whomever jacked around with this stuff must have had shares in the printing companies that had the rights to publish at the time. Cynical? Moi? :-D
I didn't know the Immaculate Heart of Mary Mass was only made a universal in '42. Whatever. :-D It wasn't *quite* what it was (I think!) in 1920. I had it all marked out to follow the "Missae de sancta Maria in Sabbato" in "Tempore Paschali" Which wasn't quite right. (The Latin book I have is from the 20s. Close, but no cigar.]

I quickly grabbed the 1948 Mass which did have a Mass for the Immaculate Heart of Mary -- which irritatingly doesn't have the Epistle or Gospel in Latin. But I knew the Gospel was same in '62 as in the 20s. I'm not so sure about the Epistle though!

But I don't feel too bad. I'm pretty sure Father started to say the Gradual instead of the Greater Alleluia. He caught it and corrected. Unless going to the EF is giving me auditory hallucinations. Whatever. I didn't ask afterwards. Father had bigtime box office business in the confessional after Mass. Must be a good confessor. [No, I don't know. I usually go to complete strangers for confession! Easier for me to dump that way.]

[Uh, Fr. Gismondi, if you run across this, could you, like, maybe, when you put the bulletin together, just note the Epistle and Gospel readings to be done in the bulletin, as an extra clue? I knew it was going to be for the BVM today, but not the Immaculate Heart of Mary. The Commems. didn't throw me. TLM pulls that often enough for even me to get that.]
Posted by gemoftheocean at 10:35 PM