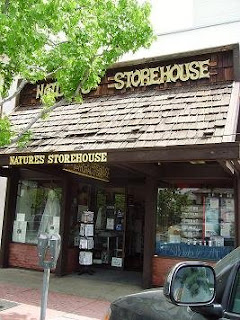 Meant to get around to posting this earlier. After Mass this Saturday, a woman told me that there was a "natural" food store called "Nature's Storehouse" that also carried quite a stock of Catholic Goods for sale, including Catholic Missals in the EF form. [I own a number of earlier Catholic missals, but had not had the "last" one promulaged in 1962.] She'd been telling another woman that there are also cheaper copies of just the ordinary parts of the Mass also for sale. They also carry a selection of religious books in Spanish.

I don't know the city of Chula Vista which lies a bit south of San Diego very well, but I thought I was pretty up on the "Catholic" stores in San Diego county. The Pauline has (or should I say "had?") the best book selection, but I think this store stands up quite well. They have quite a good selection of orthodox books, catechisms, spiritual reading, plus statues, rosaries, missals, medals, holy cards, etc. If memory serve they also carry Catholic greeting cards, and 1st communion supplies, etc.

The store is on the east side of 3rd Street, in Chula Vista, close to where "F" street crosses it. They also have a little room set aside for people who'd like to say the rosary, which is said in this store everyday it's open, at 5. 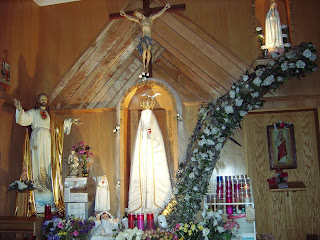 There is a nice family who run the store, (and the Lady and her grown son are originally from the Midlands in England) and there have been people who have claimed to see visions and have had physical healing. They do not advertise the religious goods, but simply let people "find them!" Initially it was just a health food store, but they were inspired to create a little chapel, and add the religious goods. They felt "called" to do so.

I also show one of the aisle dedicated to relgious goods, there is more behind me, as is the chapel. 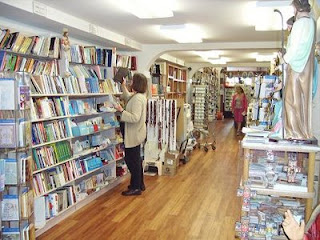 The store also has a delightful skylight above their loft. 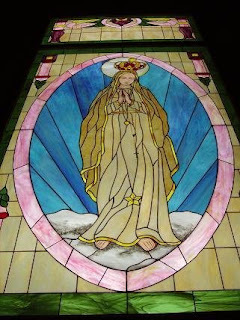 Father G. , from St. Anne's, blessed the missal I'd bought this morning, using the EF blessing for such items. I was a little surprised he rubbed the Holy Water into the missal after he had sprinkled it -- especially given I had almost hacked up an entire lung this morning during the "silent canon." So if he comes down with beri-beri or something exotic, it will be all my fault!!!

[Gee, whiz, Father, if I'd known you were going to do THAT, I'd have waited!]
Posted by gemoftheocean at 5:47 AM

Karen, what a great story! I am from the Midlands in England (Stoke-on-Trent to be precise) so i am wondering how the family came to live in Chula Vista? Perhaps the lady married an American?

It looks like a wonderful store. I get some hits from Chula Vista,i wondered if it was your good self, but perhaps it is someone else, dunno, any way, i really enjoyed this post!

Yup, Ukok, BINGO. She married a US citizen. At first when I asked her where she came from, she said "around Birmingham." Then I mentioned Jackie's blogsite, then mentioned the ORatori up there. Then I said I hadn't been north of Stratford, but then they said "Oh, then you've been to England, we're actually much closer to that, and I said oh, you must be from the midlands then, and she said yes, but nobody in the US knew where they meant when they said "the Midlands." :-D

I told her I'd give her a plug. The Lady has a computer in her store, so perhaps she is the one giving you the hits! Give her a shout out on your blog.

I thought my English readers would find that fun that this lady landed in Chula Vista from England.

I will definately give her a plug!

Thanks for responding to my comment, Karen, and next time you are in the store you might mention that a fellow Midlander wishes her well, feel free to let her know about my blog too if you like :-)

Youbetcha. Now that I know it's THERE I'll be paying it periodic visits. BTW, this lady is a convert to the faith, and she's in the foreground of the "aisle" shot.

Oddly enough a really close friend of mine also knew of it, but didn't have time to check it out as she was in a rush. She'd been walking down the street, and noticed the window flyers which mentioned they had daily rosary, but didn't have time to go in. She was delighted at what I told her. She lives much closer to that store than the other Catholic bookstores in the county.

I love it when businesses have little signs of faith. [This one goes in for it in a big way, mind!]
Some time back when I was in Sacramento for a visit, I did a post about Leatherby's. A great ice-cream place in Sacramento (and believe me, in Sacramento, it's as hot as Hades in the summer time.)

I wrote a fun post about it a while back which you can see here.

Interesting! I live in Chula Vista myself and I remember passing by this store at night (walking to my car after eating at La Bella's) and seeing the statue of Our Lady at the front store window and being utterly confused at what kind of store it was. (Catholic Bookstore or some kind of herb store).

I'll have to check it out when I get the chance!

Wi, I know, "who knew?" I mentioned to the lady that I thought they really should adverstise in the yellow pages or whatnot, and she said "We just let whomever finds us, find us." Wow.