The Sainted Msgr. S. had celebrated his 55th Anniversary of his ordination to the priesthood today. 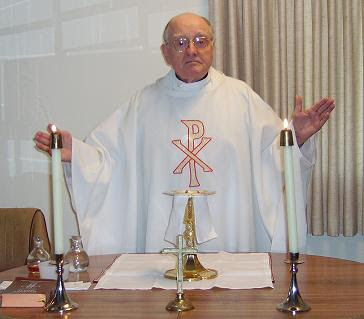 He will have his 81st Birthday this coming October. Until Last year when he was retired from being our beloved supply priest at our 5:15 Sunday Mass at my parish. A while back I had a more detailed post about him here (smiling!) I had assisted him at Sunday Mass since my own college days - more than 30 years ago myself. I was honored to be able to assist him at Mass again tonight.

He hates posing, but I "made" him before Mass tonight, which was in his home. Father is using a chalice he had made for when he was ordained. He has always used it at his daily Masses since he's been a priest. 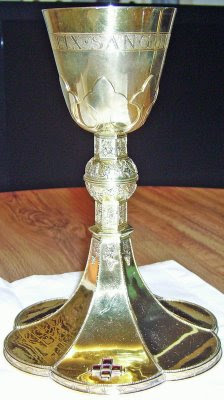 There is a beautiful story about this chalice. He did not by any means come from a wealthy family. He'd wanted to be a priest from about age 12, and went in to the minor seminary about age 14-15. For years, the family of his aunt (who was his Godmother) had a big jar where the would add any spare pennies, nickels, and dimes for the him, so that he could have a nice chalice when he would be ordained. When he was in the major seminary, a priest he had for canon law and moral theology had been a priest in Lithuania - and that priest had a bejeweled chalice made in Germany - the jewels were THAT priest's way of getting money out of that Communist country!

Msgr. S. and a classmate of his, both got the name of the German man who'd made their professor's chalice. This German man was delighted to have the work, because in the early 50s Germans were very impoverished from the war and they had little income, and less chance to use such skills. So it was all hand crafted (there is a nice paten to go with it.) If you click on the photo you can get a large picture (or should be able to if I do this right!) Each little grape bunch is slightly different! And all along the rim of the base there are grains of wheat. Also where the fluted curved parts join each other at the base, there are very small "nails" to symbolize the nails on the Cross.

The chalice has a nice heft to it and excellent balance. I'm glad the photo came out clearly.

I've also had a picture taken of the antemension he uses for Mass. This should also enlarge if you click on it. 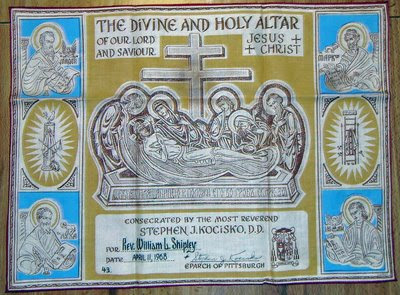 After Mass, Father and I went out for his favorite treat, Kentucky Fried Chicken! He was amused by my experiences with the Latin Mass - talking about what it was like "back in the day" -- and he also related how Bishop Buddy "of late and happy memory" ;-D could be a real....well, shall I say hard nosed individual to deal with. "Back in the day" (the 50s) everyone and his dog wanted to get into the SD diocese, so Bishop B. would get them to do extra work "as long as you're here I want you to go over to the Immaculata (big parish church on the campus of USD) or the Cathedral and sit in the confession box, [for hours back then!] you don't mind, do you Father?" Fr. Shipley would sometimes have to be the bearer of this particular news! Then he also had fun telling me about the one day the bishop consecrated ALL the altars in the Immaculata (there's a good 12 side altars in that one! plus the main one.

He also related a tip some of you priests may want to know [well, to be fair, maybe it only worked on that bishop.] If you LIKED where you were, you AVOIDED the bishop at all costs!!! If you were "Ready for a change" in that case you went to ALL the bishop's functions and schmoozed as much as possible. Not that you'd SAY anything, but it got the bishop's gears turning [there were a lot of new parishes going up in the diocese then[ and the bishop would say to himself "now THAT would be a good man for X."

Tomorrow when I have some time, I may get a chance to put up some audio of the Sainted Fr. S. which I had captured at Mass about 2 years ago. Thank Goodness the thought had occurred to me then "I've been assisting at this man's Mass for over 30 years and I don't have any audio!!" I think it should be preserved for posterity.

There are more articles featuring him if you click the tag "The Sainted Father S. -- one of which has a *bit* of a pic taken shortly after he was ordained - he vowed to kill me if I published the entire, as he calls it "Little Lord Fauntleroy" pic.)
Posted by gemoftheocean at 5:59 AM

That is indeed a beautiful chalice. As a chalice should be, considering What it holds.

What a beautiful post. I think it's wonderful that you are the Sainted Msgr. S share such a lengthy history of friendship, of 'family' really. I especially likes that Msgr. S' favourite meal is KFC!

I would love to buy him a KFC if i ever found myself wandering through San Diego...though it's unlikely since i live smack bang in the middle of England and don;t hold a passport! LOL!

Congratulations to Msgr on the occassion of his 55th Anniversary, and God Bless you for your warmth and support towards him.

Yes, he really is quite a wonderful person. I treat him as I would a favorite uncle - and this one a most special favorite uncle not only because of his priestly status, but of his consistent "alter Christus" in action!

I hope you clicked on the photos of the Chalice in particular when you enlarge the photo it's almost lifesize!