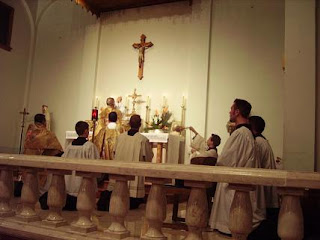 Last night I went to the first High Mass I went to since I was very young. I have to say that back in the day, a lot of families, mine included, only went to the high Mass if we overslept. So I came in with vague memories. Last night's Mass was well attended, and once again the Little Oratory assisted with the singing to bolster the normal St. Anne's choir. The priest was a visiting missionary from New Zealand, now stationed in Nigeria in Ibo country. He was quite young, according to him "recently ordained."

I happen to love incense, so I was delighted there was enough to choke a heretic with. Full complement of servers, and I have a good guess as to why when His Hermeneuticalness was at a few high Masses with muckety mucks that he was a 2nd subdeacon. The first one stand in line with the humeral veil and hold the paten (I think in the misty dark ages, someone must have ticked off the head man or whatever, and he said "YOU, THIS Sunday you're going to stand behind the deacon in a thoroughly fatiguing way, we'll come up with some allegorical reason later, but YOU, you're being punished!!!" ) Then the 2nd subdeacon is there to complete the picture of getting to hold up the left side of the chasuble. And be someone else to manoever around. Two torchbearers but I don't know how many physical torches there are to be carried.

I didn't time when it started but it was to start at 7 - it did end at 8:25. Assuming they may have been at most 5 minutes late, then it really didn't take much more than 15 minutes longer than the average Sunday Mass does today. [The Epistle and the Gospel were re-read in English, too.] 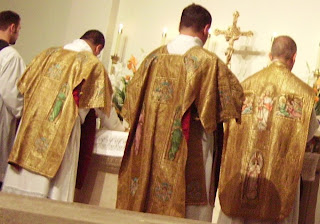 The vestments were particularly sumptuous, nice to see them on someone's back rather than a museum, and there were a veil and burse to match. Click on the picture with the isolated chasubles to see more detail.
Posted by gemoftheocean at 3:27 PM

I'm pretty sure that there is only a deacon and a sub-deacon at High Mass (I think you get an assistant priest - don't know what he's called - when a Bishop is celebrating Mass) and the sub-deacon is the one who gets to hold the paten...

Well, I was going by what Fr. Tim called himself, I thought. i.e. 2nd subdeacon. It would make sense what you say. In a normal situation, I think you'd be hard pressed to come up with that 4th guy.

How do you manage to snap photos during Mass without someone giving you the hairy eyeball?

Angela, I'm in the front row, far right, and I never put the camera to my face or use a flash, so it's all the light available, The camera is a very small vivitar, and can easily fit in the palm of my hand. So far no one has said anything. I even mentioned to Father G. that I had taken some video and he had no idea I'd done it. Granted his back was to me most of the time during the Vespers on the other post, but he passed RIGHT IN FRONT OF ME when they processed to the side, and he didn't see it. I gave him a copy of the last 23 minutes of the vespers video (parts 1, 2, 3 of the post below.)