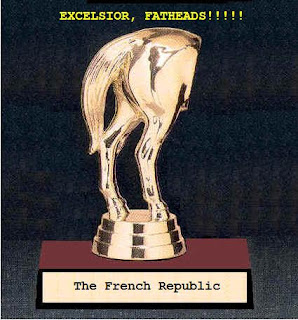 This is a first, a group award to an entire country. Gee, I know this may be an obscure history topic, but besides the US name another country during the Second world war which was instrumental in freeing France from Nazi hordes. The country I'm thinking of is English speaking, and had a population over well over 40 million at the time. I'm wracking my brain, but it seems to me if it wasn't for that rather large fixed floating landmass of an Aircraft Carrier otherwise known as the United Kingdom, which was used as a staging area to amass men and materiels and contributed her own life blood to cause, the French might well now be speaking German to this day.

What's coming up....why June 6th. Oh, my goodness, how time flies...it's the 65th anniversary of the Normandy D-Day landings. Hey, here's a thought, France throws a big "Thank you for saving our asses" celebration. Let's see whom to invite. How about as the 1st people on your guest list, you invite the heads of state of all those who have helped saved your ass? THERE'S a thought. Oh. But if you're whatever passes for the French government you go into a snit and decide that you don't like the head of state of the UK. I wouldn't blame her if she went to the balcony of Buck House and gave the French the finger. Or, I suppose, in her case, fingers. Maybe next time the French can just liberate themselves. 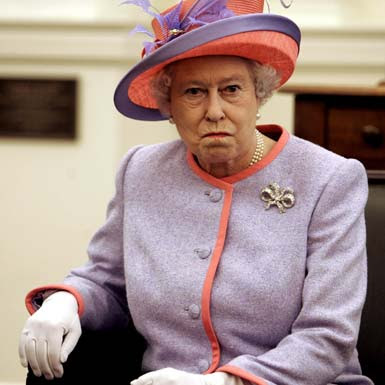 Or perhaps I'm being mean. Maybe they're just sparing her the sight of the blow-job the Obaminator will get from the French people. He's done SO much for them, by comparision.
And as long as we're at it:
Why is the Champs Elysee lined with trees? So the Germans can march in the shade.
WTF?
Posted by gemoftheocean at 3:25 PM

Labels: France, HA Award, Yo - Sarkozy or however you spell your stupid name put some ice on that

Well done Gem!
They have never forgiven us for Waterloo!

Those Frenchies do make a habit out of being invaded, rather!

Karma for the Brits coming in on the wrong side of the First War.

Bravo, Karen! It is especially galling since she is a living legacy from the Second World War.

M. le President, please be advised that my father - WHO WAS THERE ON JUNE 6TH, 1944 - would want Her Majesty to attend. I think those who fought and those who were defended carry more weight than you and your squiff, Carla.

Sandy and Sisto, frankly, the only reason they came to our aide in our own little tete-a-tete was because they hated you guys!

Just remember that the frogs think Jerry Lewis is a great cinematic figure. Also they seem to have this penchant for protecting our sotial deviants from criminal prosecution (e.g. C. Chaplin, R. Polanski, I. Einhorn)....

Archangel... French cinema, now there's a crime. It is soooo dull and "sophisticated", not.

(Well, what do you know, the word verfication wants me to type in "messe". How very French.)

Harold Macmillan (Prime Minister in the late 50s/early 60s) once said in an interview that the trouble with the French is that they can't forgive the British and the Americans for having rescued them from the Nazis.

He didn't (of course) mean that they didn't want to be rescued; rather, he meant they were so embarrassed at having capitulated and at having been rescued by the despised British and Americans that they channelled all their national shame into resenting those who liberated them.

I beg your pardon, Fr Richsteig? You think that the unprovoked invasion of Belgium should have been supported by the UK, not resisted?

ROTFL, Fr. Sean. Fr. Erik was being funny. Check out his blog and you'll know he's off the hook. You have to realize that Fr. E. is paying off his church debt by having pattented his "skateboarder zapper." Keeps the little so-and-sos from breaking their necks on church grounds (and away from *his* liability insurance people.) That way they skateboard over at the small 7-11 parking lots and if they end up sueing, 7/11 has deep pockets. And anyway, Belgium, having no natural defenses, is begging to be overrun anyway. What were they thinking? They could have easily overtaken France any given August.

Fr. Sean,
Yes I do as the French were planning the same thing. At least the Kaiser would have been grateful to John Bull.

Herr Brown has said today on TV that if Her Maj wants to attend on 6th June he will arrange it.....otherwise he will go on his own! What's new

E.F. Well, if you'll pardon the expression: "That's mighty white of him."