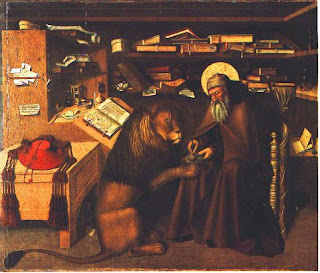 ...to my friend Chris-
tine Y. this 30th Day of Sept. Got this in just under the wire. She's forgotten more about musical theatre than I ever knew. Funny how people meet. Back in the mid 90s the week my mother died, there was a showing of a segment of Crazy for You by the two principals of the Broadway cast - and I'd missed it due to all the goings on. A few weeks later I wrote to rec.arts.theatre.musicals to ask if anyone had taped that episode and Chris responded. She'd been a long time lurker. I must say my life has been enriched by knowing her.

She's also by happen stance a librarian. We're both rather fond of that grumpy saint, Jerome, whose feast day was today.
Posted by gemoftheocean at 7:41 AM