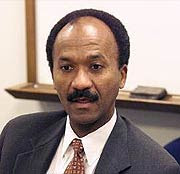 The stupidity of the rank and file 'RAT party members is predictable. Move along. Nothing to see here.

Franklin Raines is the former chairman and chief executive officer of Fannie Mae, the government sponsored enterprise started in 1939 to offer mortgages to Americans wishing to become home owners.

After serving as budget director under President Bill Clinton, Mr. Raines served as CEO at Fannie Me from 2000 until 2004.

While Mr. Raines was CEO, Fannie Mae went deep into the practice of buying mortgages based on almost no or no money down given to borrowers who could not afford them.

During this time he received bonuses and salary over 90 million dollars.

In 2004 he was offered "early retirement" after the accounting practices used at Fannie during his tenure to secure top executive bonuses were shown to be fraudulent. Civil charges were filed against Raines and two other former executives which sought $110 million in penalties and $115 million in returned bonuses from the three accused.

The three executives agreed to pay fines totaling about $3 million,
which will be paid by Fannie's insurance policies. When pressed by the Bush administration to tighten down regulatio ns on Fannie Mae and Freddie Mac, members of congress,Republicans and Democrats alike, in positions to pass such regulations, did nothing. Raines was called "a targeted black man" by Democrats.

Today, Fannie Mae owns or has guaranteed over half of America's 12 trillion dollar mortgage market, and we are in the middle of a credit crunch and housing slump brought on in large part by government backed Fannie Mae going down this dangerous credit slope under Mr. Raines.

And where is Franklin Raines today?

He is a chief economic advisor to the presidential campaign of Senator Barack Obama.
Posted by gemoftheocean at 5:37 PM

I love how stupid people think the democraps are the ones that are going to do better for them on taxes.

Ignorant fools. I loved it when Billy blow job, the "hubsbad" of the wicked witch of Chappaqua RAISED taxes on those fools receiving social security. First thing. I'm sorry, but if you can't remember what happened even a week ago, much less in the last twenty years, you have NO business going to the polls. Hey, Demos...don't forget to vote, Wed. Nov. FIFTH.